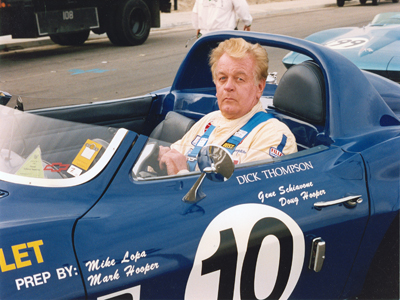 Corvette Hall of Fame Inductee Doug Hooper began racing in 1959 behind the wheel of his 1957 Corvette. A regular participant at Cal Club and SCCA Events, Doug’s achievements note him as a world-class racer and one of the first drivers to have brought the Corvette to the international stage as a winning racing machine following his win in the “Times Grand Prix” in Riverside, California on October 13, 1962.

In December 1962, at a special Z06 brake test session at Sebring, Zora Arkus-Duntov approached Doug and asked him to test his new secret project – the Grand Sport. After the test, Doug was scheduled to co-drive the Corvette Grand Sport with Billy Krause at Lemans in June 1963.

Doug drove at the 3 hour Continental at Daytona in mid February 1963, and after the race, the GM sponsored race program ended.

In the summer of 63, Doug raced all over the West and had many wins and opened “Doug’s Corvette Service” in North Hollywood, California and created one of the premier Corvette and Rochester Fuel Injection repair shops in the country.

In 1989 in addition to the shop and racing, he added to his busy life and became a Reserve Police officer for L.A.P.D.

In 1993, Doug continued to stay active in racing and was asked to prepare and tour the country in the original #001, 1963 Grand Sport – the same car he had tested at Sebring some 30 years earlier!

Under Roger Penske’s ownership in 1966, this Grand Sport, one of the original five, had a 427 L-88 big block motor installed and was previously driven by Corvette Hall of Fame legends, Dick Thompson and Dick Guldstrand at Sebring in 1966. Doug toured the USA Vintage Race events in the 1993 season with the car and raced it with great respect and admiration of the public.