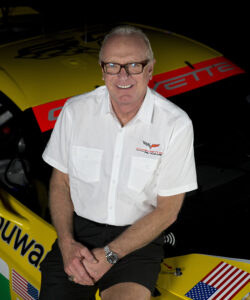 When you look back on any pivotal moment in history, you can usually identify one key person who played a critical role in making it happen. This is true with the history of Corvette racing as well. It took a man with the resources of Briggs Cunningham to get that first win at Le Mans; it took someone with the swagger and fearlessness of Tommy Morrison to break the 24 Hour World Speed Endurance Record; and it took Doug Fehan to put together a factory team that would become the most successful road racing program in history. Sure, they all had help, but you cannot tell the story of any of those achievements without mentioning those key people.

Doug brings with him a combination of skills rarely found in one person. He has a keen knowledge of the business of racing and a skill for evaluating the performance and capabilities of others; he knows how to set, exceed and advance corporate objectives; he is a comedian, boss, PR person, salesman, negotiator, liaison to the sanctioning body, respected by team mates and competitors alike. While the familiar face of the “Jake” icon may have been named by Corvette Marketing Manager Gary Claudio, but their mascot inherited his “Take No Prisoners” attitude from Doug Fehan, Corvette Racing Program Manager.

It should be no surprise that Doug grew up in the automotive world. His Grandfather, his father and his uncles were all in the car business, and they were also big race fans. On Saturday nights they had a ritual of going to War Memorial Stadium in Buffalo, New York, to watch the jalopy races, and at three years old, they brought Doug along. “I remember becoming of fan of the #11 car,” Doug recalls. “The driver was Larry Marx. It’s funny how something like that can leave a life-long impression on you. I think about that when I see young people lining up to meet our drivers.”

Doug’s grandfather opened a car dealership just north of Detroit in Birmingham, Michigan, and Doug’s father soon followed, eventually opening his own body shop. “Within that universe of a dealership and body shop,” Doug recalls, “my brother and I were always around race cars.”

By the mid-sixties Doug and the guys in the shop had built a USAC (United States Auto Club) Grand National stock car. “It was a 1967 Chevelle that we raced for three years,” Doug says. “My dad was okay with it, and he was happy to let us use the shop but made it clear he wouldn’t be providing support for this racing thing. He was always supportive, but he knew that racing using your own money wasn’t the ideal situation.” That adventure came to an end in 1969.

Several years passed before Doug and his brother eventually bought a Cosworth Vega to run in Showroom Stock A, and took it to race at Waterford Hills Road Racing Club, just north of Detroit. It turned out that a lot of the local automobile executives would come there to race their own cars on the weekends. As Doug and his brother began developing their team, those executives began to take notice. “We had a fair level of success, winning a lot of races and setting track records. We were the guys to beat at the amateur level. So much so that we were approached by Mickey Matus from Ford Motorsports marketing about racing their new SVO Mustang on a grassroots level. They weren’t looking for huge exposure but thought that racing it regionally in SCCA would be good for them. We jumped on it, and they gave us a car. Dad was excited when we brought it to the shop as this was a bona fide factory effort, albeit showroom stock. I started wondering then if we had something that we could sell–something that could benefit both Ford and whomever I sold it to.”

Doug had a connection into Mac Tools, so he set up a meeting to make a presentation. Up to that point, Mac Tools had never been into racing, so Doug put together a complete marketing plan showing how they could integrate this Ford factory program into their sales network. The President of the company, John Campbell, loved it, and signed on as a sponsor. “It turned out to be wildly successful by any measure,” Doug said. “They doubled their sales in two years. This led to me being invited to become the Director of Racing for Mac Tools.”

As Mac Tools continued to do well, internal politics forced John Campbell out, leaving Doug feeling as if his days were numbered. “Fortuitously, that’s when Herb Fishel called me. He was the Director of Racing for GM and had some programs that were struggling. He needed someone to figure out what was going on and give him a plan to turn those teams around.”

Doug spent a year going to each IMSA and Trans Am race in which Chevrolet competed, evaluating their failing programs and observing what everyone else was doing right. “I put together a report outlining a path where they could improve and take their racing program forward. Ultimately, Herb decided that I should be the person to implement the strategies I recommended.”

Doug worked on the Beretta program and won a championship in 1990. He then moved on to MTI Racing providing management for Jim Miller on the Intrepid program. Gary Pratt was the Team Manager, and Doug was the Program Manager. The next stop was the Oldsmobile WSC race program resulting in winning the 1996 Championship. Through all of this networking, the pieces were falling into place for what was coming next.

One of those pieces was the C5 Corvette that was being developed. This was the car that Herb felt could fulfill his lifelong dream of competing at Le Mans. He brought Doug in to look at the car and asked him to put together another plan to show how this could be accomplished.

Doug went to the design studio to see the new car, and then put together a template of what it would take to go racing. Doug’s recommendations called for two years of development, done in secret. “We would once again bring in Jim Miller, who is an incredibly astute and experienced businessman. He is also a racer and knew what it took to run a successful organization. Gary Pratt and I knew each other from when he worked with Roush at Protofab. Gary brought skills that were unparalleled in design and fabrication. Jim Miller had seen this in Gary too and had already formed Pratt & Miller with him. At that time, the company basically consisted of eight people, a desk top computer, a Dually, a fifth wheel, and a rented bay out of Wixom, Michigan. We didn’t start out with much, but I knew that if I could convince Jim that this program had a future, he had the business acumen and resources to take us wherever we needed to go. He also had the innate ability to recognize businesses that were going to do well and businesses that were not. Fortunately for us he made the judgment that this was something that had legs… something he could make work. The association with Chevrolet would help that move forward. All the credit for our later success is on Gary and Jim and Pratt & Miller. They were the ones that put their shoulders to the wheel and took the risks. The rest is history.”

And what a history it has been. The team would go on to win 12 Manufacturers Championships and 107 races in their 21 years of competing. In 2001 they would take the overall victory at the Rolex 24 at Daytona, and so far, they’ve achieved Herb’s dream of winning Le Mans eight times.

“When I was nine years old, I would read about Le Mans in a magazine called Sports Car Graphic. I remember studying the pictures, and reading it over and over again, never thinking I’d leave Michigan, let alone the country, to see that race. The idea of competing there and winning never entered my mind.”

On June 17, 2001 it happened. After 24 hours, the #63 Corvette would win its class at Le Mans, with the #64 coming in second. Both of the Corvette Racing teams would be on the podium together.

“Every emotion you could imagine in an entire lifetime was packed into that 24 hour period. And when the checkered flag came down, the exhaustion, the emotional and physical release is such that you have no control. You have nothing left. Everyone on the team was crying and laughing, hugging and holding each other up… we were all on the verge of collapsing. Then it was time to go up with the drivers onto the podium that overlooks the straightaway. They open the track to the fans for the ceremony, creating a sea of people. Looking down at them, raising the trophy in the air as the National Anthem of the United States of America was played… it was just incredible…an Olympic moment. Even now, I get emotional thinking about it. It was the most monumental experience of my lifetime.”

Looking back, at all of the checkered flags, Doug says that one of their most important wins is not listed in the record books. “When we started the program, Dave Hill was the Chief Engineer of the Corvette. Dave attended every weekly planning meeting, and he even assigned an engineer to work with us. He wasn’t there just for the technical aspect of it either, but to learn about what racing is–the teamwork, the planning, the strategy, the competitive nature and dedication of every member of the team. Eventually, Dave had his letterhead reprinted to include the line, ‘Bring the racing spirit to work.’ That was a penultimate moment for me. That philosophy has been carried forward, embraced and expanded by Corvette Chief Engineer Tadge Juechter, and is something you see fully embodied in the new 2020 Stingray Corvette. That car is the product of the decade’s long partnership between racing and production, working as one team, with our customers behind the steering wheel serving as our driving force. That is the biggest victory of all.”