Delivery Customer Gets More Than a Car 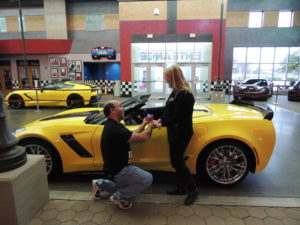 Mike Basile and girlfriend of eight years Stacy Sulima had been planning a visit to the National Corvette Museum for a few weeks, primarily to take delivery of Mike’s new 2016 Z06 through the R8C Museum Delivery Program. But what Stacy didn’t know was that Mike was also planning to ‘pop the question’ during the visit.

“When I figured out when the delivery date was going to be then I made the decision that it would be the time,” Mike said.

Stacy explained that they had been living together for a few years and an engagement was inevitable. “We knew it would eventually happen. It was just a matter of when is the right time.”

Poised on the Museum’s Corvette Boulevard, delivery host Jonathon Tabor tells Mike that his penalty time is up. After which, Mike drops to one knee and proposes to Stacy.

The running joke between Mike and Stacy was that they were in ‘penalty time.’ “We had been dating for seven years and Stacy was like, ‘now I’m eligible’ but I told her no, it’s like soccer. You don’t know when penalty time is going to end.”

After teasing Mike about waiting so long to finally propose he joked that “you gotta weed out the bad ones!”

Mike and Stacy live just outside of Philadelphia and are members of the Skyline Drive Corvette Club. Mike also owns a 2003 Corvette with 289,000 miles on it, and Stacy has a 1969 Corvette that she says needs a little work.

We, of course, had to take the opportunity to let Mike and Stacy know that our Conference Center is perfect for wedding receptions, and we’ve had a few weddings in the Skydome. Just sayin’, guys!

Congratulations to this fun couple! We’ll be watching the mailbox for the wedding announcement!

Check out our video of their special day…