Defying the laws of physics – that was the promise of Active Suspension. Instead of using springs, dampers and anti-roll bars to react to and manage a vehicle’s dynamics, Active Suspension systems used sensors, computers and high-pressure hydraulics to completely control a vehicle’s behavior. An “active” automobile could lean into a curve while preventing any bumps in the road from upsetting the steering and cornering dynamics of the car.

Like many revolutions in auto racing, Team Lotus invented Active Suspension for Formula One. Development began in 1981, and by 1983 the system would see limited action with Nigel Mansell at the wheel. Around the same time, Lotus Engineering was beginning development of the engine and chassis of what would become the ZR-1 Corvette. In December 1985, Lotus was purchased by General Motors, and by 1987 GM had budgeted $27 million to develop Active Suspension for the ZR-1.

CPC (Chevrolet-Pontiac-Canada) Engineering established a program to evaluate the technology by building a fleet of 50 Active Suspension Corvettes with the ZR-1, 32-valve engine. Initially, the project called for the Buick Touchscreen CRT system, which was developed for the 1986 Riviera and Reatta, but the engineering team preferred to have the instrumentation on their new laptops. The fleet were delivered to GM Bowling Green Assembly, complete with software operating as specified.

Meanwhile in the F1 world, Lotus never fully came to grips with the technology, yet it proved to work with lap times of nearly two seconds faster than competitors without the Active Suspension. With an unfair advantage and high costs of developing the systems, F1 banned Active Suspension for the ’94 season. This, coupled with a hydraulic failure on Alex Zanardi’s Lotus during the Belgian Grand Prix causing a horrific crash, caused the systems to be gone by mid-1993.

Though Active Suspension had many benefits, it never made it to the production ZR-1. At a press preview event for the 2009 ZR1, Harlan Charles, Corvette Product Marketing Manager, shared that the system could consume over 25-hp in a hard turn, though only 3-hp was needed at rest. The hydraulic fluid, circulating at 3,000 psi, required extra heat exchangers and vents for cooling (bringing durability into question), while the added components brought the total weight of the Corvette to nearly 4,000 pounds. With cutting-edge electronics, aircraft-grade pumps and actuators, the cost of Active Suspension on the ZR-1 was estimated at $35k-$40k – yielding what would have been the most expensive Corvette ever made. An additional issue would have been high-pressure hydraulics allowing no room for error when it came time to service the car.

Chevrolet is thought to have built 50 or more Active Suspension Corvette prototypes. Three are known to remain: EX5878, EX5881 and EX5886. This vehicle was purchased by the late Greg Mauzy and his wife Michelle of Midland, TX from the Barrett-Jackson auction in West Palm Beach in 2009. The vehicle is formerly of the General Motors Heritage Center collection, but was mandated to be liquidated (along with other prototypes and hard assets) to assist with the company’s financial recovery as part of the U.S. government bailout of GM.

Despite the shortcomings of Active Suspension, it did help pave the way to new technology in automotive design, including Active Handling in ’96 and Magnetic Selective Ride Control in ’03.

Thank you to the Mauzy family for their generous donation! 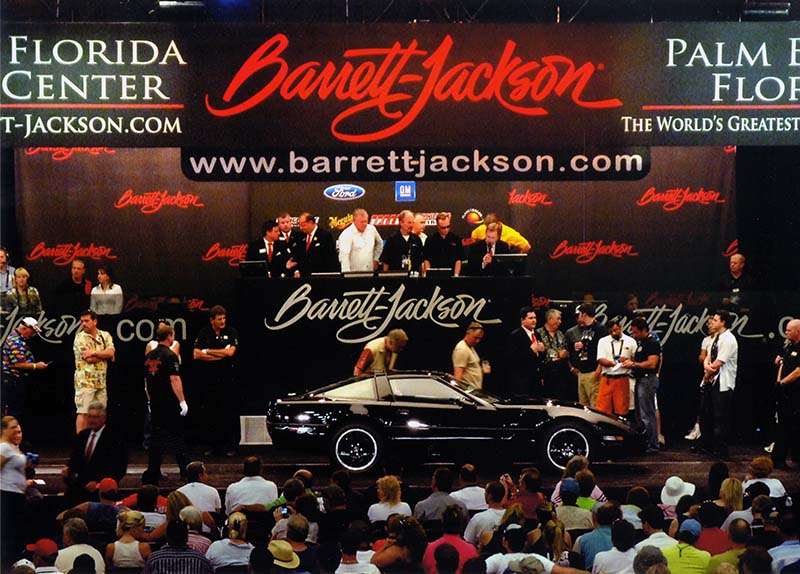