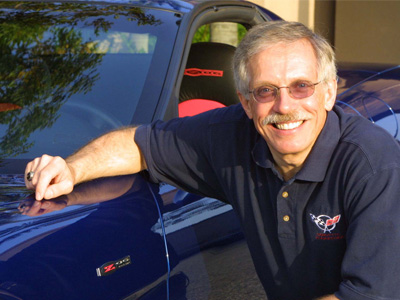 David Hill has often been seen at the annual Corvette Hall of Fame banquet, program in hand, requesting autographs of the inductees.

Hill’s contributions to the Corvette are so well recognized that his Hall of Fame nomination was almost simultaneous with his retirement announcement. Corvette’s third chief engineer, Hill took over development of the C5 from Dave McLellan and saw it through to completion during some of GM’s darkest days when the very survival of the car was in doubt.

“The C5 upgraded all the things Corvettes were good at and fixed all the things they were lousy at,” says Hill, and the automotive world agreed. That success was followed by the resurrection of a legendary RPO, the Z06 Corvette, and then Hill’s crowning achievements, the C6 and C6 Z06, a direct result of Hill’s collaborative approach with Corvette Racing.

Hill’s work ethic and insistence on perfection made his team and his car a world beater; his keen understanding of the need for profitability raised the Corvette to a level of success and status within GM that it has never known before. Maybe posterity will agree with Joe Spielman’s assessment that, “Corvette is here today because of Dave Hill.”