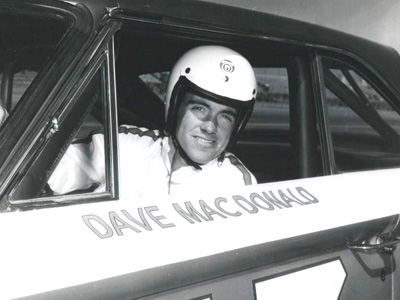 Corvette Hall of Fame Inductee Dave MacDonald was recognized by Zora Duntov as one of the two best Corvette drivers in the world, sharing pilot duties with Dick Thompson in the 1963 Stingray being filmed by GM for “Biography of a Sports Car,” a national ad campaign for the car. As a driver during the glory days of Corvette Racing, MacDonald had a better win percentage than any other Corvette racer with 47 victories and 69 top three finishes in 110 career starts. In 1963 he achieved his dream of becoming a professional race car driver, driving the Ford Cobra for Carroll Shelby professionally – but continuing to drive his beloved 1963 Stingray Corvette personally – even to work each day at the Cobra speed shop! It was Corvette that left MacDonald and not MacDonald who left Corvette, as General Motors pulled out of factory supported racing at that time. He ran 33 races on the SCCA, USAC and USRRC circuits and won 15 times, including the LA Times Grand Prix at Riverside and the Monterey Pacific Grand Prix at Laguna Seca.

By then end of 1963 MacDonald was considered one of America’s elite drivers, attracting the attention of team owners from all types of racing. Dave managed to squeeze in two late season runs on the NASCAR circuit; a 2nd place finish at the Golden State 400 driving the Woods Brothers #21 car and 2nd again at the August 510 driving for Holman &amp; Moody. In 1964 MacDonald remained committed to Shelby America to run the major races in the US while also signing an Indy 500 contract with Mickey Thompson and a 21-race NASCAR contract with Bill Stroppe. He scored three major wins on the USRRC circuit and finished 10th in the Daytona 500, but sadly his racing career and life were cut short in an accident at the Indy 500.