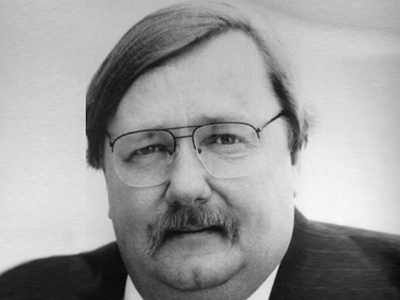 “Dan Gale was driven by a passion for the Corvette unlike any I have ever seen,” wrote Jerry Burton, Editorial Director for Corvette Quarterly. “I first met him on the pit wall at Laguna Seca. … He talked incessantly about Corvette history and his love for a man named Zora Arkus-Duntov.”

“Dan ate up everything having to do with the car,” recalls Karen Gale, who first met her future husband when he sold her a Corvette. They were married 24 years until his death in 2000.

Gale was a cofounder of the Northeast Chapter of the NCRS and a charter member of the Library, Archives and Museum Committe formed in 1986. As the idea evolved from a simple library to a multifaceted museum, Gale became increasingly excited with the possibilities. He was spurred on by Zora Arkus-Duntov’s plea to preserve the artifacts of the Corvette’s history.

“He wanted to get it up and done so that Zora could actually see it,” said Karen. “Dan loved him. Nobody could match that friendship.”

The friendship began with a phone call. With a number he had obtained from directory assistance, Gale phoned Grosse Pointe, Michigan, and was ecstatic to hear a Russian-accented voice answer. When he finally hung up the phone, he turned to Karen and said, “I just talked to God.”

Gale was elected president of the NCM Foundation’s board of directors in 1991 and oversaw the “Capital Campaign” that sought to raise the remaining millions still needed to build the museum.

In March of 1992, impatient to see the dream realized, Gale left behind his family and business in Massachusetts and moved to Bowling Green to bring the project to completion — by sheer force of will, if necessary.

As a man totally consumed by the vision of getting the National Corvette Museum built,” commented Burton, “Dan was often misunderstood. He had a style that was easily off putting if you didn’t know where he was coming from. … But Dan knew that nice guys weren’t going to get the museum built, especially during the early 1990s when the economy was in terrible shape and corporate donations were sparse. Dan knew the job had to get done within a certain window of time in order to maintain credibility with the corporate donors. He had a sense of urgency on the project unmatched by anyone.”

To Gale’s great satisfaction, on June 5, 1992, Zora mounted a bulldozer with a Corvette cutout on the side and broke ground for the National Corvette Museum. More fund-raising hurdles were cleared, the structure was raised, exhibits were created, a national Corvette caravan was organized, and amidst great fanfare, the Museum opened on September 2, 1994. Zora was there.

The night before the grand opening, Gale told a reporter: “It has not been an easy trip, but seeing the museum become a reality has been a source of great pride and accomplishment.”