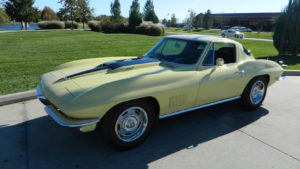 Winning bids totaled more than $8 million when Mecum Auctions returned to Kansas City last weekend for its biannual collector-car auction at the Kansas City Convention Center in Missouri. Over the course of the three-day auction, bidders took home 357 vehicles and 124 pieces of Road Art®.

Proving that they are still “America’s Favorite Sports Cars,” Corvettes dominated the top-sellers list at the auction, with seven 1960s Corvettes landing among the top-10 sales, led by a 1967 Corvette coupe (Lot S142) that brought $130,000. Other top-sellers included a 1969 Ford Mustang Mach 1 Fastback (Lot S150) with a 428 CI Super Cobra Jet engine and a 2004 Lamborghini Gallardo (Lot S96.1). As for Road Art, nearly 95 percent of pieces up for auction were sold over the weekend, netting more than $70,000.

The auction house will welcome 2017 with the world’s largest classic and collector-car auction in Kissimmee, Florida, Jan. 6-15, featuring 3,000 vehicles headlined by some of the most significant and memorable drag cars ever to rip down the quarter-mile. Main attractions for the Kissimmee auction include a selection of vehicles from the Jackie and Gary Runyon collection and a selection of vintage racers from the Lifelong Collection of Don Fezell, both assemblages featuring history-making cars driven by names like Bill Jenkins, Dave Strickler, Butch Leal, Warren Barnett and others. The auction will also feature two cars from the collection of drag-racing legend “Big Daddy” Don Garlits; the Lance Reventlow 1962 Shelby Cobra Roadster; and a multitude of other significant cars and collections. For more details on an upcoming auction, to consign a vehicle or to register as a bidder, visit Mecum.com or call (262) 275-5050.