Corvette Profiles – The Last of the C3s

The 3rd generation of the Corvette is the longest running generation to date, spanning 15 full years of production. The first production year of the 3rd generation, or C3 Corvette introduced many new features along with its new body style. The C3 came in both a convertible and a coupe for its first year, but the coupe offered an industry first – a removable T-top roof. This was the first US production car to feature T-tops. Not only was the roof removable on the coupe, but the rear window as well. This really gave owners the freedom to drive their Corvettes how they wanted. If you wanted an open-air Corvette experience, you could have it in your convertible or your coupe.

While this Corvette hit the ground running from 1968, this car faced one of the biggest hardships in the auto industry at the time – the 1973 and 1979 oil crises.

This Corvette was reshaped, reengineered, and molded to face the hardships of the time, but it was resilient. This resilience can be seen in the National Corvette Museum through the 1982 Silver Green C3 Corvette, on display as a part of the ongoing exhibit, “Unique and Rare Colors” in the famous Skydome. 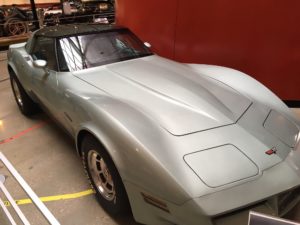 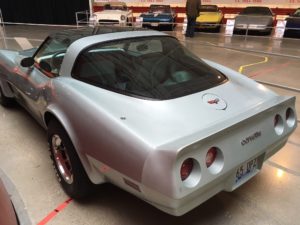 This C3 Corvette shows how the car was shaped by the economy of the time. It retains the same “mako shark” styling of the C3, but also offers a glimpse into the future of Corvette.

Into the 1980s, the Corvette body was made more aerodynamic. The front nose and rear spoiler were redesigned to better cut through the air. Not only did these changes reduce drag, but it also helped bring the body back in style. 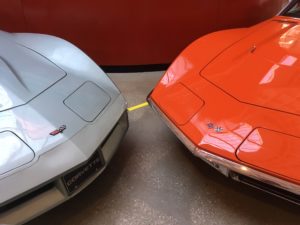 The 1980-82 Corvette body (left) was more aerodynamic than the earlier C3 Corvettes, like this 1969 Corvette (right).

In 1981, the Corvette started its move to Bowling Green, and by 1982, full Corvette production took place in the Bowling Green assembly where it is found today.

The C3, which boasted so many options in its early years, now offered only in a coupe, had only one engine and one transmission for 1982. The engine, a 350ci V8, produced 200 horsepower, an upgrade from the previous 190 horsepower found in 1981 thanks to its new fuel injection method, the “cross-fire” injection system.

The cross-fire injection also increased fuel economy to a combined 19MPG (15 city, 26 highway). It may not seem like much compared to Corvettes of today, but when the C3 was first released in 1968, the combined MPG was 12.7-13.4, with most owners at the time reporting 8-10 MPG on average. 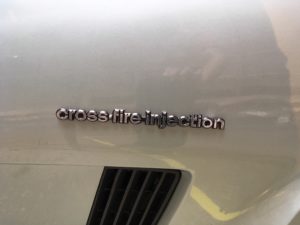 But through all of these changes to submit to the fuel economy issues of the time, the Corvette maintained its identity. It kept its V8, it kept its style, and it kept its forward thinking.

For example, the 1982 Corvette featured a collector’s edition package, which was outfitted with a glass hatchback – a design that carried over to the C4 in 1984. 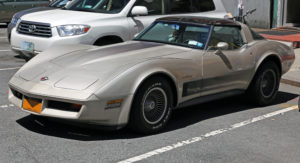 The emblem was redesigned and simplified to a checkered flag, and a Chevrolet logo. Losing the Fleur-de-lis, it was a design that would be refined slightly and carried into the C4 era. 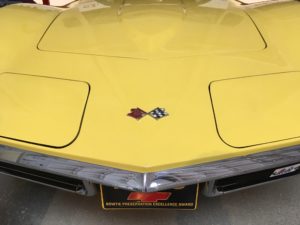 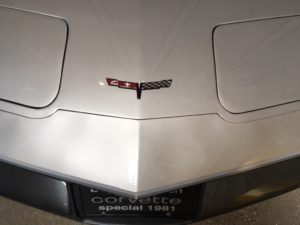 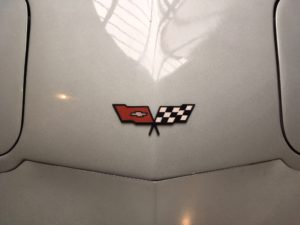 The cross fire injection system would also carry over into the first C4 Corvette, as well as other small design features such as cornering lights, that would illuminate the area to the left or right of the car when the corresponding turn signal was used. 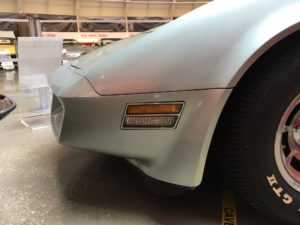 While the 1980-1982 Corvettes are met with criticism at times due to the significant drop in power from 1968, they are Corvettes through and through. They are a survivor of the times. Some of the major muscle/sports cars of the 1960s, didn’t make it through the 1970s, but the Corvette did. That toughness is what makes this Corvette such an icon.

See this fine example of the last year of the C3 in its original color on display at the National Corvette Museum, on loan from Paula and Jerry Roy of Russell Springs, Kentucky.