Back in the mid-1980s, General Motors released one of the most technologically advanced cars ever created for its time; the Corvette C4.

Upon release of the C4, the world was incredibly excited for what the car was capable of. In the 1980s, car design was like music of time. It was out with the old, and in with the new – the newer and more technologically advanced, the better.

The early Corvette C4 featured technologies such as a fully customizable digital dashboard, electronically adjustable seats, optional heated mirrors, Bose sound system, electronic flip-up headlights, and a 4+3 manual transmission just to name a few. It was THE car of the 1980s. One of the few cars that can sum up a decade. 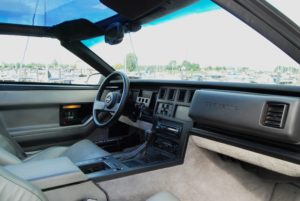 The Corvette C4 was one of the most technologically advanced cars of its time.

The overwhelmingly positive response to the C4 led to one of the most ambitious concept cars of all time; the 1986 Corvette Indy.

It all started with GM’s Vice President of Design at the time, Chuck Jordan. Jordan wanted to expand on the technologies found in GM road cars, as well as develop a car that used a street version of their newest racing engine, a V8 IndyCar engine with twin-turbos. Chuck Jordan found visual inspiration for the body in a rendering by Tom Peters. 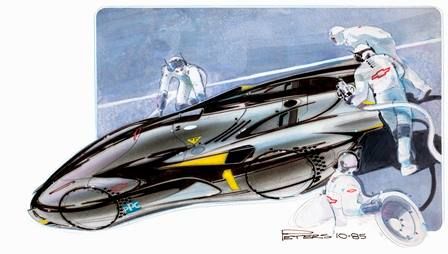 One of the renders created by Tom Peters in 1985

The original Corvette Indy went from clay model to full-size show car in just six weeks, just in time for the 1986 North American International Auto Show. This show car boasted unheard-of technology for the time, including… 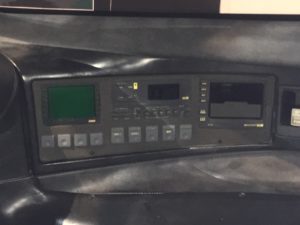 Radio and climate controls can be found on the driver and passenger doors. 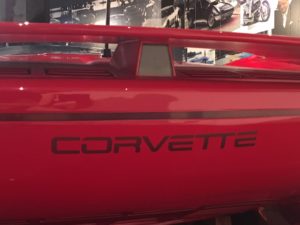 Rear-view cameras have been integrated into the rear-end design.

But most importantly – It was a mid-engine Corvette. The rear-mounted twin-turbo V8 engine produced an upwards of 600 HP, and it was heavily inspired by Zora Arkus-Duntov’s design ideas from his time at GM where he introduced a V8 engine to the 1st generation Corvette, and was a huge advocate for mid-engine cars. Zora’s mid-engine Corvette dream car was never produced for the public, but the inspiration can be seen in the Corvette Indy. 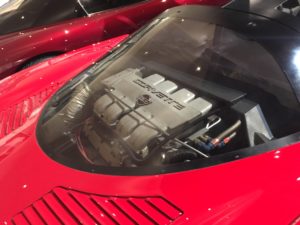 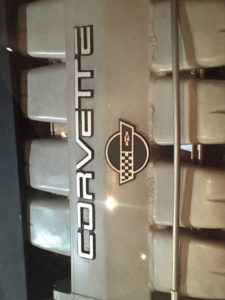 Through the rear glass, the mid-engine V8 is on display – featuring a futuristic take on the ‘Corvette’ text of the time, and C4 logo.

The Corvette Indy was so influential in its appearance at the NAIAS, that GM built two more models; one fiberglass model, and one fully-functional Indy that could potentially be used on the road or track.

At a glance the Corvette Indy can be dismissed as a regular concept-style car. Aggressively different styling, bold engine statement, intense use of technology…

But it is much more than that.

The Corvette Indy captured exactly what a Corvette is – without using obvious styling cues.

The interior, while covered in new buttons and switches, does stick true to some C4 features. On the center console you can find seat adjustment controls, just like the C4. On the doors you can find radio and climate controls, which is just a step forward from the C4 which had wiper controls on the door. 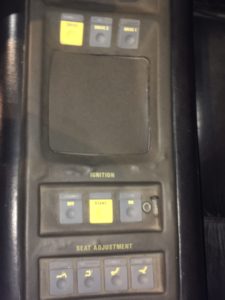 Seat adjustment can be found on the center console just like Corvettes of the time, but on the Indy it is accompanied by ignition controls as well.

The exterior features four headlights, two on each side, just like the 1958-1962 C1. The rims look similar to the 1984 C4 rims. The front fenders do rise high around the wheel just like the famous C3 fenders. 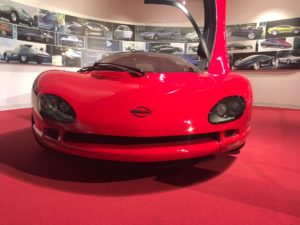 While the top of the car may seem incredibly abstract with a full see-through bubble design around the cabin of the car, it is still a Corvette-inspired feature. For the 1980s, Corvette left the traditional T-tops that have been found in Corvettes since 1968 in favor of a Targa top – a removable one-piece top. Targa tops changed the way you viewed every drive in a Corvette. Just because you had a coupe didn’t mean that you couldn’t take the top off and have the open feeling of a convertible. Clear Targa tops gave you the feeling of being in a convertible, without any contact with the weather outside. 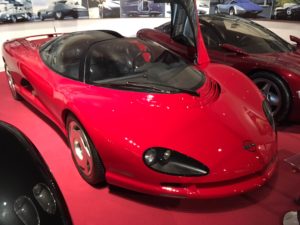 This rooftop design captures that feeling of being outside in the elements, while staying safe inside the car.

While the 1986 Corvette Indy did not become the C5, its curvy shape did predict the styling choices of 90s cars well. In fact, most of the Corvette Indy’s design cues were picked up by the 4th generation Camaro which premiered in 1993. If you look at a 4th generation Camaro just right it can be argued that the pointed nose, headlights, and rear spoiler design cues were inspired by the Indy. 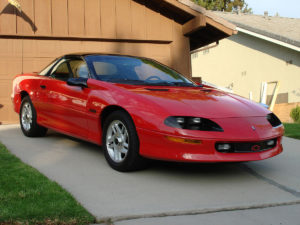 The Corvette Indy may not convey “Corvette” at a glance, but look closer next time. It captures the Corvette feeling of bold American independence. Behind the wheel of a Corvette you are strong. You earned this car. You are your own person, going your own way. You are powerful and free to go your own way with a car that reflects your personality.

That is what I believe the Corvette Indy aimed to capture – a bold styling direction, while keeping the spirit of Corvette alive for the future.