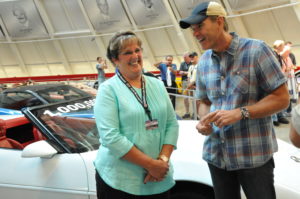 Ray Evernham speaks with former GM Plant employee Angela Lamb, who signature was the only not saved on the 1-millionth Corvette restoration. Angela signed the replacement part at the car’s unveiling.

“This new season of AMERICARNA offers more exclusive, captivating stories than ever before,” said Robert Scanlon, General Manager of Velocity and Automotive Content. “Ray picks up where he left off as one of the most knowledgeable car experts around. He has greater access to industry insiders and headline makers to bring extraordinary stories to the AMERICARNA series.”

The episode featuring the Museum is the premiere episode, a special one-hour on Thursday, March 3, following the story from the day rare and invaluable Corvettes were swallowed by the earth while on display, to the rebuild and salvage of the priceless cars. The episode will also include exclusive original footage of Corvettes being lifted from the sinkhole, interviews and behind the scenes planning with the team leading to the restoration of the valuable cars.

In the premiere, Evernham also heads to Music City – Nashville, Tenn. – to work with renowned Big Machine Label Group® President and CEO Scott Borchetta in sharing his extensive car collection and the story behind each one. From leading the world’s biggest independent record label (home to artists like Taylor Swift, Florida Georgia Line and Tim McGraw) to serving as Contestant Mentor on FOX’s “American Idol”,  Scott balances his work life with his car passion as he currently is a three-time champion at Nashville Speedway.

“I can’t wait for Velocity’s viewers to come along with me for another season of exploring the most interesting car stories America has to offer,” said Evernham. “I’m interviewing passionate car people from the music and racing industries, drag racing vintage hot rods on the beach, witnessing Corvettes that were destroyed by sinkholes being brought back to life and much, much more. Young, old, male or female, AMERICARNA will have a little something for everyone.”

AMERICARNA is full of new car related stories including the tale behind the renowned old-fashioned hot rod race The Race of Gentleman (TROG). Featuring autos from 1934 or earlier, TROG participants race their old-fashioned wheels in vintage apparel down the coast of the New Jersey Shore. Also new this season, Evernham explores the legendary Beverly Hills Speedway, as well as racing icon Dan Gurney and his #48 AAR Eagle.

The season includes a total of eight episodes, including 2 one-hour specials, the premiere and the finale, and the remaining six are 30 minutes. If you missed seasons 1 and 2 you can still catch them on iTunes. Learn more at http://www.americarnatv.com/.

The episode is available on iTunes, YouTube and, depending on what television service they have, it is available through Discovery GO: https://www.discoverygo.com/americarna.