If you are a Corvette enthusiast, movies, tv shows, music videos and even commercials are so much more appealing if you spot a Corvette in them. Well, get ready because “Fast 8” is featuring a 1966 Rally Red Corvette.

Of the 27,720 1966 Corvettes made, only 3,366 were Rally Red. The 1966 Corvette came standard with Holley carburetors, and subtle differences on this model year vs previous models were an elongated, vertical style Corvette script on the hood, and a square-mesh, plated cast grill.

The lucky cast member behind the wheel of the 1966 Corvette is Michelle Rodriguez, a 38 year-old San Antonio, Texas native. While Michelle’s character shows off her moves behind the wheel in the Fast and Furious franchise, in real life she’s also pretty savvy – most recently achieving her personal top speed of 201mph in a new Jaguar F-TYPE SVR.

What other cool rides can you expect to see in the film? Dennis McCarthy, vehicle coordinator for the film, estimated the value of the cars used in one scene alone totaled around $17 million. Included were a 1929 Ford Rat Rod, McLaren 675LT, Speedkore Kuda, Twin Turbo Lamborghini, Ferrari F430, Rolls-Royce Wraith and 1956 Chevy Bel Air.

“It’s basically what I feel is probably the coolest cars we’ve put together for one scene, and it’s without a doubt the most expensive collection of vehicles we ever put in one place,” McCarthy said in a Facebook live video.

The film has been shooting in Myvatan, Iceland, New York and most recently in Atlanta. Other filming locations will include Cuba and Cleveland.

That moment you run into a shooting of #Fast8 #LifeinNyc 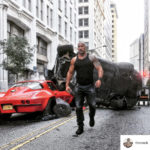 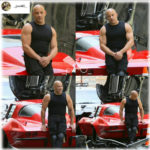 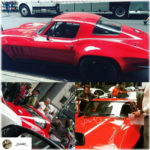 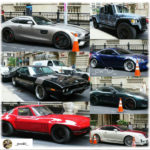 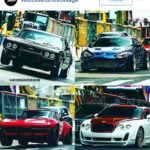 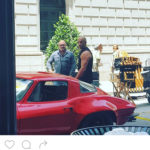