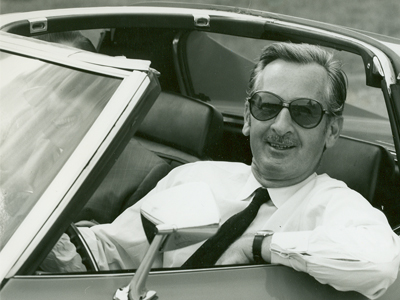 Clare “Mac” MacKichan was instrumental to the design and success of all Chevrolets in the mid-twentieth century. In his position as Chief Designer of the Chevrolet Studio, General Motors Design Staff, he was directly responsible for the design of all of the Corvettes from number one, through the 1950s and early 1960s. It was under his guidance that the 1954 Waldorf Show Corvettes were designed. In addition to his position as Chief Designer for Chevrolet, Mac also served as Director of Design for GM’s Adam Opel AG in Germany, and later as Executive in Charge of Advanced Design and Engineering for Design Staff.

While he didn’t always work on the Corvette brand, he continued to own one and participate in many Corvette activities – appearing and speaking at car shows and event all over the country. He would even decorate his office with parts of Corvettes that had been thrown away. Mac bought Corvettes and truly loved having a role in the creation and evolution of America’s sports car, even though it was unrecognized due to Harley Earl’s policy of giving credit only to himself, and later to Bill Mitchell. Sadly, Mac passed away but his contributions to the Corvette live on.