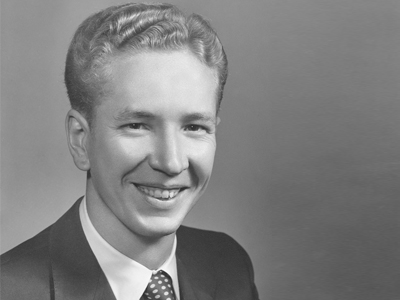 Corvette Hall of Fame Inductee Carl Renner was part of the “Project Opel” original Corvette Motorama project design team. In 1945, after leaving Walt Disney’s design studio where he worked as a cartoon animator, Renner took his portfolio filled with automotive designs and headed for General Motors Styling where he landed a job as a junior designer in the Orientation Studio. GM was then beginning to turn its attention back to producing automobiles for the general public and designers were needed. He was promoted to Senior Designer in 1946 and transferred to the Chevrolet Studio. From 1950 to 1955 Renner took an active part in the entire design process of the 1952 through 1957 Chevrolet models. Other Renner design contributions include the Corvette side cove (1956), Corvette ducktail rear end (1961), the Corvette Nomad roofline and the deluxe steering wheel, grilles, recessed hoods, the “notch belt” fender line, parking lights, bumper guards and side trim.

In 1954, he was promoted to assistant chief designer in the Body Development Studio. As part of the “ninth floor” crew at the Body Development Studio that Harley Earl used to work on special, private projects, the group became responsible for the basic shape of the first Opel – the future Corvette. The grille of the “Project Opel” Corvette was based on Carl Renner’s 1950 and 1951 renderings where he served as part of the project’s design team, although the answer to who is most responsible for the Corvette remains a mystery, thanks in part to the level of secrecy enforced by Harley Earl. Renner was also responsible for the Nomad which was essentially a Corvette built with an extended station wagon roof. Carl Renner passed away on January 22, 2001.