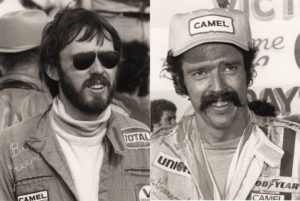 The story of John and Burt Greenwood goes back to childhood when their dad, Hank, would take them to work at the GM Tech Center. Prototype cars would be unveiled for the boys at the Design Dome, sparking an obsession for all things automotive.

John grew to be a gifted, self-taught engineer and a fiercely competitive driver who would blow away the street racers on Woodward Avenue in his 1964 Silver Corvette. This led to starting a shop called Auto Research Engineering, where he did performance work for his competitors. They were eager to pay him to have what he had under the hood, which would ultimately help him finance his racing career.

John’s first National Championship came in 1970, during his first full year of competition. He followed that up with victories in 1971 at the endurance races in Sebring and Watkins Glen, leading to a 2nd National SCCA Championship. Many victories would follow including the 1975 TransAm Driver Championship and Manufacturer Championship for Corvette.

All along, John’s brother Burt, was an integral part of the team. He was the “rule guy” going over all the racing regulations, looking for any angle to give his brother an edge. He became a student of aerodynamics, taking what he learned from his heroes on the track and applying it to the Greenwood street cars. Working together with a team of dedicated mechanics and some covert help on the side from GM Designers and Engineers, the Greenwood brothers made racing history. To this day, those star-spangled Corvettes are a reminder of American pride and America’s sports car.