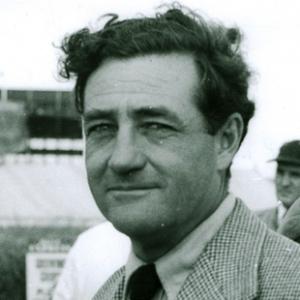 The Corvette Hall of Fame is housed within the Skydome of the National Corvette Museum. Look up and you’ll see the portraits of those who have been recognized for their role in Corvette history. It is fitting that it is within a dome as it forms a single continuous wall of faces, all looking down from different eras at the cars on display below.

Some people are inducted for their lifetime of devotion as an enthusiast; some for their record of achievements in racing; while others are honored for the dedication they’ve shown to Corvette through their association with GM, often going far beyond the call of their duties.

Joining them this year is Briggs Swift Cunningham, Jr.

Briggs is not being included for any of those reasons. He is going in for a single epic moment in Corvette history. His contribution however, was such that it would add to the legend of Corvette heroes such as Zora Arkus-Duntov, Ed Cole, John Fitch, Dr. Dick Thompson, Chip Miller, Keven MacKay, all the way to today’s factory racing effort. His single moment of greatness would add the title of “Le Mans Class Winner” to Corvette for the very first time. His accomplishment would go on to provide the current Corvette Racing team a record to build on with their own eight victories, giving fans bragging rights going all the way back to 1960.

Briggs was born on January 19, 1907. His father was a wealthy financier who had made a fortune investing in real estate, utilities, railroads, and a variety of other interests. One such investment was in a little company started by William Procter and James Gamble, who had invented a bar of soap that could float. Cunningham Sr. was the sole investor. He would die at 75, leaving his 7-year-old son with a sizeable fortune to build his own dreams upon.

Growing up, Briggs found himself drawn to racing on both land and sea. He made friends with Miles and Sam Collier who were classmates at Yale, and together they began racing cars on the private roads surrounding the Collier estate. As a side note, today several Cunningham constructed cars reside at the Revs Institute as part of the Collier Collection.

By 1940, he wanted to drive the racecars himself in races but didn’t out of respect for his mother’s wishes, so he busied himself constructing them for others to compete in. It wasn’t until his mother passed away he began taking the wheel himself with gusto. His cars began winning at Road America, Watkins Glen and Sebring. His ultimate goal however, was to compete and win for America with American product in Europe.

Briggs would race his own car designs as well as Cadillacs and Chryslers, taking them to Le Mans with good results, but not the victories he worked for. Then one day Chevrolet Chief Engineer Zora Arkus-Duntov proposed the Corvette as the vehicle for making his dream come true. Briggs agreed.

General Motors President, Ed Cole, was unofficially behind the effort, and wanted to see Corvette compete at the big race. Chevrolet had officially agreed to take part in an industry wide ban on racing, but people like Ed and Zora knew that a Le Mans win was essential to developing the reputation of Corvette worldwide.

To do this, they’d need a man like Briggs Cunningham. He was someone with the resources needed to take the street car and make a race car of it. His wealth could also bring together the best mechanics such as Alfred Momo, and the best drivers of the day like Dick Thompson and John Fitch. He also had gained worldwide attention as an American Sportsman that went along perfectly with Corvette’s style. He had been featured on the cover of TIME magazine in 1956 with the caption “Road Racer Briggs Cunningham / Horsepower, endurance, sportsmanship.”

Another significant thing that Briggs brought to the table was his experience at Le Mans. Corvette had never competed at Le Mans before. To beat all of the other seasoned competitors, Corvette would need a man like Briggs Cunningham.

Briggs accepted the challenge and bought three 1960 Corvettes. The tradition for Le Mans back then was to coordinate a car’s color with the colors of the country it represented. Consequently, Ferrari was red to match the flag of Italy, while blue and white were the colors chosen for the United States entrants.

Beyond the paint, however, the cars would need significant modifications to be up for the challenge of a 24-hour long endurance race. Bigger tanks were added for longer stints, while handling was improved with better shocks. Corvette was heavy compared to the cars it would compete against, so larger brakes were installed with ducts for better cooling. The engines were worked on as well, getting them up to an estimated 350 horsepower–significantly higher than the 230-290 hp found in their production counterparts.

The drivers selected for the challenge were among the best that could be had. Briggs put himself in the #1 car with Bill Kimberley, while Dick Thompson would share the #2 car with Fred Windridge, and the #3 car would be piloted by John Fitch and Bob Grossman.

Finally, on June 25th, 1960, the drivers lined up for what is called the Le Mans start. Back then, drivers stood on one side of the track with their cars on the other. When the flag dropped there was a foot race with drivers sprinting to their cars. They would jump in, start the engines, and hook up their safety belts as they pulled out on to the track.

Aston-Martin took the early lead, but the Maseratis were faster that day. Le Mans isn’t just about being fast or early leads however—winning this race requires good handling, braking and being able to see it through to the end. Within four hours all of the Maseratis had been retired.

The #1 Corvette would be the first of the Cunningham cars to fall. With the threat of rain looming ahead, the call had been made to let the car go without wet tires for a while longer.  This turned out to be a huge mistake as a “wall of water” descended suddenly on the track causing the car to flip at the infamous “White House” corner. Fuel spilled and caught fire burning off the ignition wires. Kimberley escaped uninjured, but his day was done.

Shortly after that, Windridge spun out the #2 Corvette at the same treacherous place doing 130 mph. He bounced off the walls on both sides but was able to limp back into the pits for repairs. The crew managed to get the car back in the race, but ultimately the engine blew, leaving only the #3 Corvette with a shot at victory.

The car had been running cool at 175 degrees according to Thompson, who was now a spectator watching from the pit. Things were looking good for the Corvette, but another factor that comes into play at Le Mans is fatigue, and the mistakes that can be made because of it.  On one stop, a crew worker wound up pulling the radiator cap causing hot water to shoot out. It was too hot to refill, and the rules would not allow liquids to be added to the car at that point.

For a lot of teams, this might have ended their day, but Briggs had assembled a crew that wouldn’t readily accept defeat. Thinking quickly, someone had the idea of putting ice in the radiator.  As ice is a solid it wouldn’t be a violation of the liquid rule to add it, so race officials permitted it.

Zora watched wide-eyed from afar as the crew began packing 25 pounds of ice around the engine to cool it off while simultaneously slipping chunks of it into the radiator. As they sent the car out, more bags of ice were hauled in so they could re-ice it every few laps. The crowd, sensing the drama of it all, gathered behind the Corvette pit to cheer the team on as the steaming #3 came in for each of its cool-downs.

In the end this strategy paid off with the #3 Corvette coming in first in its class and eighth overall.

The year that Corvette debuted at Le Mans, it had won.

Coincidentally, when the current Corvette Racing team recaptured the title in 2001, it too came in first in class and eighth overall. If there is such a thing as “fate” it certainly made a case for itself with that footnote in history.

While it is true that most people who are voted into the Hall are inducted for their years of devotion, list of achievements or sacrifices made for Corvette, sometimes they are voted in because of their impact on Corvette as a whole. There is no doubt that the impact of Briggs Swift Cunningham, Jr., was seismic.