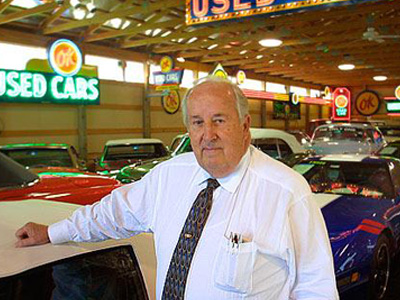 For some Corvette enthusiasts, their love for Corvette only goes as far as their garage. For others though, that is only the beginning. Some join clubs to promote the Corvette lifestyle, go to shows, attend races and/or become members of the Corvette Museum to insure that the Corvette’s legacy is passed on to others. While every Corvette enthusiast is important, the Corvette Hall of Fame was established to honor those who have distinguished themselves by promoting the Corvette dream in extraordinary ways that impact us all.

Bob McDorman has done just that. Known throughout the Corvette world as a Corvette collector, one of his collections reached 206 cars. He included at least one of every model year that there was along with 12 Vin 1 cars, prototypes, and celebrity vehicles owned by people like Alan Jackson, George Strait, Burt Reynolds, Dolly Parton, John Mellencamp, Johnny Carson and Mario Andretti. As a Chevrolet dealer, he’s sponsored clubs and car shows and even supported our America’s Sports Car magazine with regular advertising while helping charities and others less fortunate along the way. His love for America’s sports car seems to permeate every aspect of his life.

Bob was born in Xenia, Ohio in 1932. He grew up on a farm that raised sheep, hogs and cattle, but from an early age it was clear that his future would be with cars. “When my folks would buy a new car, they’d have to come and get me out of it to eat dinner because I’d always be in it. I’d be examining it, playing with the knobs and stuff like that. I was always just crazy about cars.”

When he got old enough, he began working at his father’s International Harvester dealership as parts manager. But even then his desire was to get into the car business. At 20 years of age, he joined a Buick-Pontiac-GMC dealership in London, Ohio. The love he had for his work, and the work ethic he had learned from his father propelled him up to Service Manager and then Body Shop Manager. All of this would add more experience that would become useful one day when he would have his own dealership.

From there he went to work for a Chevrolet-Oldsmobile-Cadillac dealership as a used car salesman, parts manager, and used car manager. It was 1953 then and as you can probably guess, this was the year that his life was about to change.

One day while mowing his mother’s lawn, a white sports car with red interior came around the corner and drove by the house. Driving it was a Chevrolet dealer who lived just down the street.

“I didn’t have any idea what it was, but I knew it was gorgeous,” says Bob. “I thought it was the neatest little car that I had ever laid my eyes on. I went to his dealership the next day and asked him about it, and he said it was a Corvette.” The dealer took Bob to go see the car up close. “I spent two hours looking over that car. I couldn’t believe that Chevrolet had designed a car that sharp. From there on, I’ve had a passion for them. I couldn’t afford one for awhile but my desire to get one kept building over the years. I remember when that ’63 split window came out. I wanted one so bad I could taste it.”

Bob’s love for Corvettes, collector cars and cars in general grew as he continued to hone the skills needed for his chosen trade. “Apart from being crazy about cars, I love being a dealer and getting involved with people’s lives. I like helping to find a way out of their problems.”

Bob purchased his dealership in 1965, which was also the year he got his first of many Corvettes. “I never had enough money to buy one when I was young and running around. I suppose that is why I collect them like I do.”

Once Bob took over the dealership, he discovered that they had never sold a Corvette before. He got busy trying to get one for his showroom and ran into some problems with GM. “They had a ‘turn and earn’ policy at the time. The more Corvettes you were able to sell, the more you’d get.” Bob eventually got one and to up his quota, he even purchased new Corvettes at full retail from other dealers so he could turn around and sell them at his dealership. His efforts paid off, eventually earning him the notoriety of being one of the top Corvette dealerships in the country. “Today it is difficult to get that many Corvettes because of the limited amount of them they make and how they are allocated to dealers throughout the nation.” Back in the ‘70s though, Bob was responsible for passing along his love of Corvettes to many new owners.

His dealership went on to coin the phrase “Corvette Spoken Here” and over time he proved it by amassing a collection of Corvettes so great that it would rival the Museum’s. He obtained historic cars too, like Bill Mitchell’s 1964 experimental Sting Ray and the Corvette that belonged to Bunkie Knudsen, former GM and Ford executive who is considered to be the father of muscle cars and the man behind the Super Sport brand of Chevys.

To share these great cars he hosted a show each year called “Corvettes on the Canal,” which is said to be one of the largest car shows dedicated to the Corvette in the United States. Attracting Corvettes and Corvette lovers from all over, Bob displayed his own personal “historic motorama” allowing visitors to take a walk through the history of Corvette to view cars from every model year. To keep the show even more interesting, in 1976 he started giving away a brand new Corvette as the prize for the person who won Best in Show. This show was completely a labor of love though and despite the fact that the dealership lost money doing them, he made sure that $5,000 from each one was donated to the Children’s Hospital in Columbus Ohio. “So far, we’ve raised over $250,000 for them,” he said. “I’ll spend the rest of my life helping the community, churches and charities.”

Over the years Bob has assembled and sold three large collections of Corvettes and collector cars. In November 2011 he sold his latest collection, proving that for Bob, hunting down and collecting is where the most fun is. “The only reason I sold the collection is that I never get to see the cars. It was tearing me up knowing they were sitting there unappreciated. I used to see them at the shows, but during the last one I was too busy to enjoy them. I’ll never stay out of it though. I can’t give it up.” He adds with a laugh that he just bought another classic car to start off his fourth collection.

Bob looks back with fondness on all of his great experiences with Corvette people and the car that has been the source of so many good things in his life. “I learned a long time ago that you can fake your attitude, you can fake enthusiasm but you can’t fake passion. I’ve got the passion.”

For passing along his passion for Corvette to so many others; for his support of the NCRS, NCCC, and Corvette clubs through the years; for the way he has enhanced Corvette’s image to the world by using his Corvette collections and car shows to generate hundreds of thousands of dollars for charity; Bob has shown himself to be the kind of Corvette enthusiast that inspires others to make a difference. For that, we welcome him into the 2012 Corvette Hall of Fame.