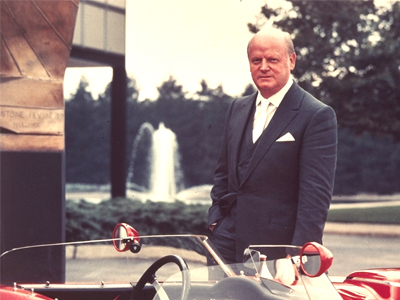 William L. Mitchell loved the Corvette more than he loathed the buttoned-down committee oriented culture of mid-century General Motors. As a result, GM gained enormously from Mitchell’s design genius and Bill was able to indulge his passion for drawing-and driving-fast cars. He drove the way he drew: with gusto. And because he did, Chevrolet’s Corvette emerged from its childhood to become the great American sports car.

A job at a New York ad agency in the late ’20s found Bill sketching Bugattis, MGs and the like as they raced through some of New York’s most aristocratic neighborhoods. Some of his works found their way to Harley Earl’s desk. Bill was hired by GM in December 1935. Less than a year later, he was Chief Designer at Cadillac. Mitchell succeeded Earl as GM Design Chief and the Corvette became “his baby.”

GM was officially out of racing, so Bill rented a garage near GM’s Warren, Michigan Tech Center and formed his own team. He bought and rebodied Zora Duntov’s Sebring SS mule car, dubbed it the Sting Ray, and installed Dr. Dick Thompson-the Washington, D.C. dentist-behind the wheel. The car was SCCA C-Production champion in 1960. It has since been celebrated as the missing link between the SS and the Grand Sports of 1963, and maybe the most successful factory racer in the history of the marque.

The fact that a GM employees clay-shaper, no less-would indulge in such an adventure raised eyebrows both inside and outside the company. But it did not bother Bill, to whom the unconventional was the ordinary. Permitted to exercise a priceless Mercedes antique racecar on a Stuttgart test track in ’58, Bill powered through the comers a la Rudi Caracciola until Mercedes security reeled him in.

As passionate about motorcycles as he was cars, Mitchell wrapped one of his Harleys in silver fiberglass and rode it back-and-forth to work-always wearing his matching silver leathers. He battled against the notion of a four-seat Corvette and won. He defended the split rear window in the ’63 and won-at least temporarily. He ordered it removed for ’64 after he realized how it obstructed driver vision. Bill took on divisional general managers, salespeople, engineers, bean counters, almost anybody who attempted to tamper with his baby. He wrote in 1977 that “a good designer has got to be creative, and to be creative you have got to be dissatisfied and discontent.” It makes for a terrible personality.”

Bill disliked committees almost as much as market research. “You can line up any group of cars from the past to the present and I’ll bet I can tell you which ones were committee designed and which ones we left to the designer. The ’67 F cars-too many fingers in the pie. The ’70 F cars-they were never touched by a committee.” On market research: ‘Frank Lloyd Wright did not go around ringing doorbells asking people what kind of houses they wanted. There is not one good-looking car I designed that market research had anything to do with.” Then again, Bill would say his personal bit of market research in Los Angeles in 1941 turned him on to the California customizing craze-then still a fad-that would influence his work thereafter. He was more than merely a spectator at the hundreds of hot rod and custom car shows he attended through his 40 years at General Motors. Bill Mitchell died on September 12, 1988.