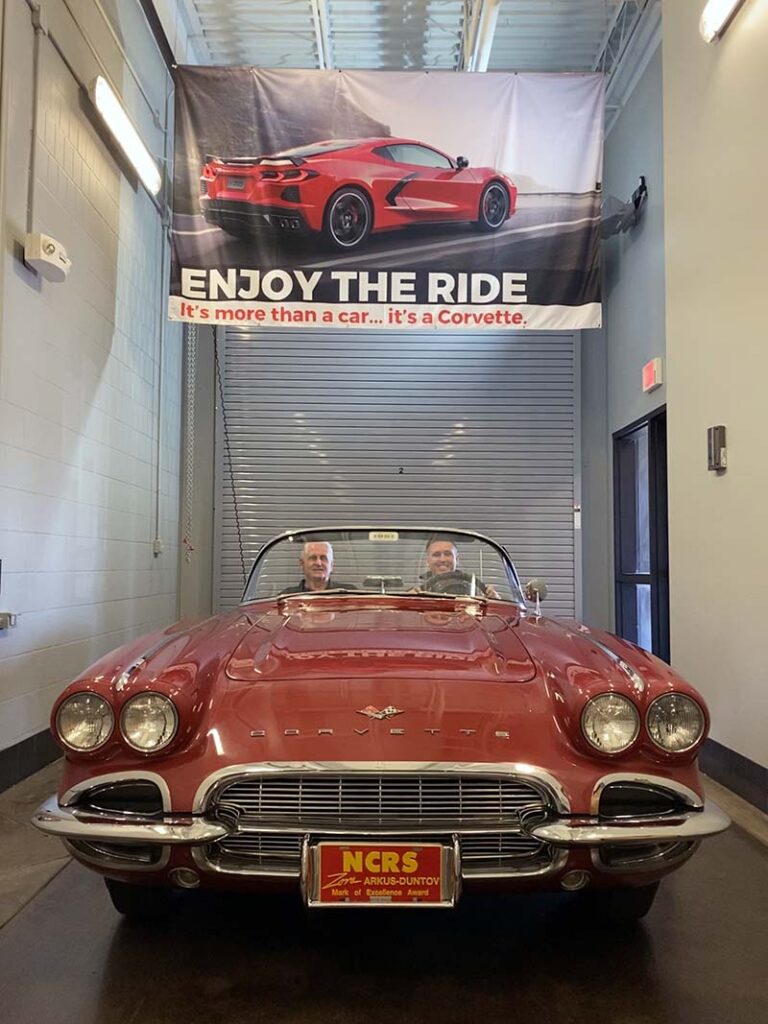 As a member of NCRS (National Corvette Restorers Society), it was only natural that Howard Maxwell would become involved with the National Corvette Museum, even years before there was a physical museum. A Founding (now Lifetime) Member since 1991 originally from Reading, Pa. and currently living in Ocala, Fla., Howie is not only a Corvette enthusiast, but also a judge for NCRS and Bloomington Gold.

“I was actually in Bloomington looking for a ’67 big block car and happened to run across this 1961, and the original owner still had it,” shared Howie. “As a kid, like many others, I couldn’t afford any Corvettes. A friend of mine was a pharmacist and he had a 1961 from new, and I had the chance to drive it. That put a desire in me to someday own a ’61. So, when I saw this car and realized it was original and had only the one owner, it certainly intrigued me. Long story short, I bought it.”

The 1961 Honduras Maroon Corvette was ordered new by Howard Heinbach, and based on its VIN, it rolled off the GM St. Louis assembly line on June 30, 1961, just as the 1962 Corvettes were making their debut. It was 1989 when Howie would run across the car in Bloomington and purchase it.

“The car has always been garage kept and is an original, numbers-matching car. It has its original engine, 4-speed transmission and positraction rear-end as it came from the factory.”

The ’61 was purchased with the coves painted the same color as the body per Mr. Heinback’s specifications, though contrasting color coves were available for that model year. The engine is a 283 cubic inch hi-lift cam 270 hp two 4-barrell carbureted car with white wall 670×15 tires, a signal seeking AM radio and white convertible top.

After purchasing the car, Howie worked to bring it back to typical factory specifications and began attending events that would certify its authenticity.

“As mentioned before, to this day, the car has its original drivetrain and engine, all numbers matching, as well as all the correct date codes. The only exception is that the car got repainted early in its life (after being parked too close to a picket fence when they were spray painting the fence). Otherwise it could have been a Five Star Bow Tie car because of its originality.”

Under Howie’s care, the car has received many NCRS Top Flight Awards, as well as passing a stringent Performance Verification Test before being awarded the Zora A. Duntov Award in 1991 at the California Annual Meeting of NCRS. “Mr. Duntov was there and presented the award. That was one of the highlights of my life as the majority of my family was there also.”

The car received the NCRS Founders Award and Bloomington Gold Certification in 1995. Since those certifications, the car has been invited to be shown at the Concours of the Eastern United States, Hilton Head Island Concours and many others.

After spending time on the show circuit, the vehicle was driven cross country on two separate occasions (from Pennsylvania to California, and Pennsylvania to Colorado). “I never considered this car a trailer queen and have several Sam Fultz Memorial awards from NCRS for driving the car the furthest distance to a meet, while still receiving a Top Flight Certificate!”

The car participated in the Fifty-Year Evolution of the Corvette caravan and display that took place in June of 2003 in Nashville, TN and Bowling Green, KY.
“It was fun being treated as a VIP since as a judge for NCRS and Bloomington Gold I am usually working at most events. It was an enjoyable experience and we were able to share some of the history of the car with the fans that came to see one Corvette from every year of production for the first 50 years of Corvette.” 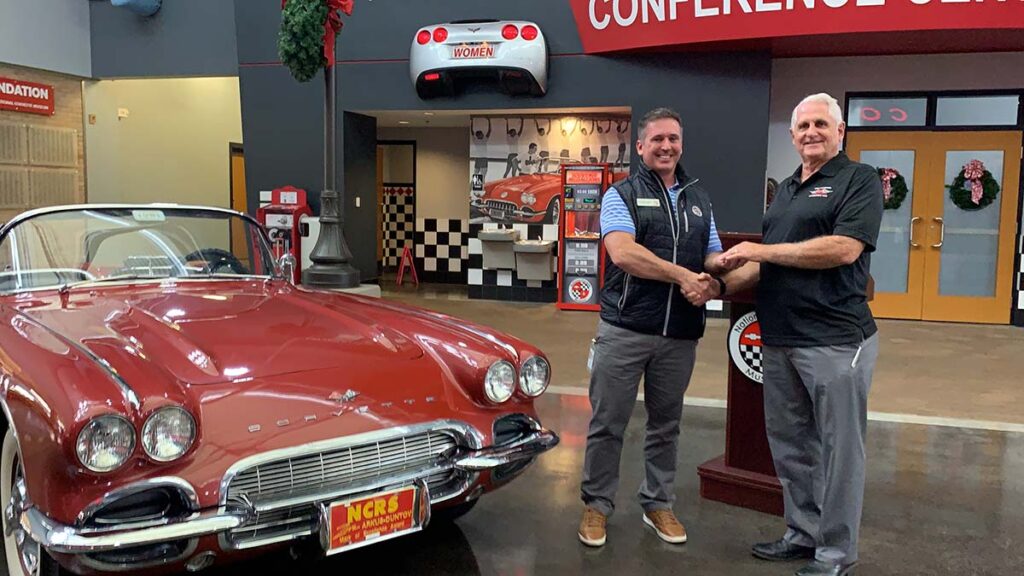 Howie Maxwell presents the keys to his 1961 Corvette to Dr. Sean Preston, President and CEO of the National Corvette Museum.

Derek Moore, Director of Collections and Curator for the Museum shared that one of his goals has been to acquire one of every year Corvette. “One of the big things our Museum is about is presenting Corvette history and telling the story of not only the generations, but the years Corvette has been produced and been a part of the Corvette lifestyle,” shared Derek. “To have a Lifetime Member, someone who has supported this institution from the very beginning be one of the people to step up and help us fulfill that mission and goal of having one of each model year of Corvette, and to do it with such an amazing car is huge.”

“Nowadays, a lot of people are turning cars into restomods,” said Howie. “I was afraid if we sold it, somebody would just want the shell and would basically put a new car underneath it, giving them more conveniences, which is understandable. For me, I’m a history buff and I like the idea of preserving the history of something. If I donate it to the Museum, it’s pretty much going to stay in the shape it was in when it was built. This way I know it’s in a place where lots of people get to enjoy it, not just one person.”

As for Howie, he will still be enjoying the Corvette hobby, including all the modern conveniences, this time in his Museum-delivered Zeus Bronze 2020 Corvette Stingray.

Thank you to Howie Maxwell for his generosity, in helping to preserve the history of Corvette and for entrusting us with his beautiful car!