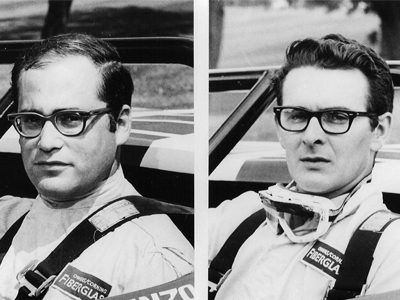 Most racing fans recognize the De Lorenzo / Thompson names as the drivers of the Owens – Corning Fiberglass (OC) Corvettes in the late ‘60s and early ‘70s. The two were the most successful duet in FIA and SCCA A-Production racing, winning 22 straight races from 1969 to 1971.

Tony attended SCCA’s drivers’ school in Watkins Glenn, NY in 1964 and a year later began racing an A-Sedan Corvair. Tony’s dad (General Motors Vice President of Public Relations) purchased a ‘64 Corvette Coupe and let Tony and his brother spec out the car. Their order caught the attention of Zora Arkus-Duntov himself who called them to make sure they were able to handle their car.

“Jer” landed a job as Engine Development Test Engineer at Chevrolet’s Engineering Center in Warren, MI in 1960, and a year later began racing a ‘56 Corvette at Detroit area tracks. During the ‘65 – ‘66 season Jer and Tony met, becoming friends and competitors.

In 1968 they received their first direct sponsorship, making Tony and Jer instrumental in putting Corvette racing on the map. Their OC racing record was unmatched by any other team. Today, both men are still involved with building and racing vintage Corvettes.