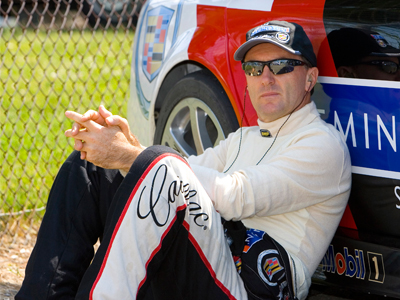 Andy Pilgrim never would have guessed as a young man that his love for racing would take him as far as it has. A computer programmer by trade, he decided to give racing a go in his late twenties and it has taken him on a high speed trip through Daytona, Sebring and the streets of Le Mans, France in a Corvette race car. Along the way, he’s competed against the best in the world with world-class teammates ultimately leading him to hundreds of podium finishes and a place in the 2012 Corvette Hall of Fame.

Andy was born in Nottingham, England in 1956. “At less than two years old came the first sign of trouble,” Andy says. “My mother was listening to a radio broadcast of a race while she was ironing when she heard me talking from the crib. I kept repeating the name of ‘Mike Hawthorn’ over and over again.” Hawthorn was a well-known Formula 1 driver who won the 24 Hours of Le Mans in 1955. “My mom was totally shocked as I’d not spoken hardly a word before that!” said Andy. “That was the beginning of my fascination with cars.”

As Andy got older, his father would take him to a nearby track to watch motorcycle races. While Andy liked it and would later race motorcycles himself, his real interest was in cars. Financially though, Andy’s family was not in a position to help him get a racing career going, so he went to school and learned computer programming instead. “Never in my wildest dreams did I ever think for a minute that someday I’d be a paid, professional race car driver. I never thought I’d realistically be able to do it. I thought I might have some natural talent, but did I think I’d end up at the level I wound up at? Absolutely not. Thankfully, I took a chance to see what would happen.”

Andy came to the states to work in 1981, earning a living while looking for a way to get into racing. It wouldn’t be until he was 26 years old however, that he would first sit behind the wheel of a race car.

“I was able to buy an old Renault Cup car in 1984 and entered it in an IMSA Renault Cup race in Riverside, California. That was my first professional race. I had to drive the car to the race though, which was about 1,400 miles away! If I crashed it, I would have been taking a bus home.”

Andy ran his car and worked on it himself, often sleeping in it when he couldn’t afford to get a hotel room. Without the money, the training or the practice that many of his competitors had, Andy discovered that he had a natural ability at driving that would lead him to the front of the pack anyway.

In 1986 the IMSA Firestone Firehawk series provided Andy with an opportunity to team up in higher profile races. Racers who were well off enough to afford to put together teams would look for talented drivers to help them win. “With a field of 120 cars, this really gave a lot of us financially challenged drivers a chance to get involved.” Andy was able to get on a team, but only had enough money to drive in two races before he was tapped out. His team owner saw his potential, however, and told Andy that he would fund the races and give Andy some of the prize money if he could end up in front. This turned out to be something good as Andy did win. In that series, out of 106 starts, he had 95 top ten finishes, 49 top three finishes and 21 victories. He was surprised when the team owner made good on his offer and gave him an $8,000 bonus.

By 1991, Andy began doing a little factory work with Tommy Morrison and John Heinricy driving a Corvette in some IMSA GT races. He drove Porsches too and had won four professional championships by 1998.

In the meantime, Gary Claudio and Doug Fehan were putting together a new factory sponsored Corvette Racing Team with Pratt & Miller in their newly created C5R. Gary had been watching Andy win in the Firehawk Series and thought he’d make an excellent driver. He submitted Andy’s name to Doug for consideration. It wasn’t long before Doug called Andy and asked him if he would be interested in a three race deal.

Those were good years for Andy. He counts the day that he and Ron Fellows gave Corvette Racing its first ever win back in 2000 as being a favorite memory. Then there are the races they should have won, like that first one in Canada, which still bothers Andy to this day. “I passed for the lead in wet conditions, but then wound up in second on a drying track. I wanted to win it so bad for Ron. It was a real disappointment and a character building experience, but we fixed it at the next race in Texas.”

Likewise, running with Dale Earnhardt and Junior was a favorite memory. “I could write a book about that.” Andy says. “The five months leading up to Daytona where Dale and I became close friends– getting to know him, running with him, hanging out on his boat, and the race itself… that whole experience was just massive for me.”

Andy recalls other good times with fellow driver, Kelly Collins. “I loved running with Kelly. I recommended him to Doug Fehan and when he got on the team, we became great friends. He did such a great job for GM racing for years and years. That was wonderful. Your teammates make such a big difference all the way around. I’ve been on teams where there wasn’t a lot of positive energy. The Corvette racing team certainly had it.”

For Andy, one of the best aspects of being involved with Corvette Racing was the fans. “I don’t know if it’s this way for other drivers, but coming from where I did, where I raced and worked on my own cars, not knowing where the next $10 was going to come from for that part I needed, gave me a real appreciation for two things. First, for the people I drive for; I know that everything costs money so I have an empathy for the equipment and try to be kind to it. Second, I realize that race fans make it possible for us to do this. Not just with attending the races but with the energy they give us. Only about 10 percent of the racing experience for me is behind the wheel driving. The other 90 percent is preparing for it and interacting with fans. There is this wonderful energy going around the race track. The fans are the ones that build you back up after adversity and have a hand in it when we win, too. We give to them, but they give so much more to us. It meant a lot to me the first time that someone sought me out to ask for an autograph. It still does.”

As Andy reflects on his Hall of Fame induction, there are too many people to thank. “Obviously, I’d have to give credit to Gary Claudio and Doug Fehan who put together such a great team from the beginning. Then to all of the people who took a chance on me along the way–who in some cases were putting their lifestyle and livelihood in my hands, hoping for a win… I appreciate them so much. That can be a lot of pressure for a driver, but what some people call ‘pressure’ I call ‘opportunity’ and I’m thankful for all of the opportunities I’ve been given. Most of all, I feel so privileged to be gathered up and embraced by the Corvette community. It’s been one of the most beautiful experiences of my life. I thank them for letting me be a part of their world.”