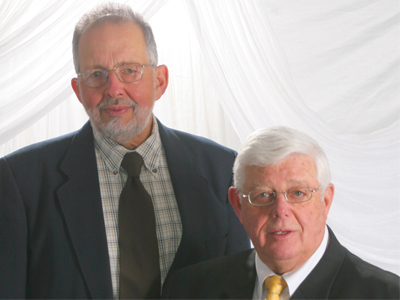 The National Corvette Museum is proud to induct Allan and Don Barker into the 2008 Corvette Hall of Fame, for these two racers exemplified amateur racing in the 1960s and 1970s. Their hard work, perseverance and “keep-it-simple” approach, at a time when Corvette racing was reaching its zenith, was a model for how to win races. The NCM is inducting two racers into this year’s Hall of Fame because the Barker brothers were a team — a team which probably would not have been as successful individually, and because their racing careers were coupled as only those of brothers could be.

Allan was the driver. He received the publicity. He stood by the race queen for the photos after the race. Don was the mechanic, the controller of vehicle preparation. He stayed in the background, and he cheered from the pits as his brother won race after race. A more symbiotic team you could not find.

The Barkers competed from 1957 through 1972, racing Corvettes for most of those years and compiling five Sports Car Club of America National Championships – four of which were claimed behind the wheel of B Production Corvettes.

The Barker brothers have left an impressive record in the annals of Corvette racing.

Don Barker passed away on February 13, 2020 in Louisville, Kentucky.