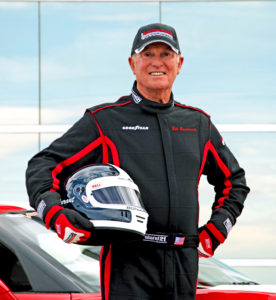 During Corvette’s early years, Bob Bondurant helped to validate the Chevrolet Corvette as a world-class sports car, winning on racetracks both in the U.S. and abroad. Bondurant’s greatest racing achievements came while driving not only Corvette, but also Cobras and Formula One Ferraris. Some highlights of his Corvette achievements include in 1959, he won 18 of 20 SCCA-B production races, winning the West Coast Championship in his 1957 Corvette #51. From 1959-63, Bob won 30 of the 32 races entered, driving the Shelly Washburn 1959 Corvette and the 1963 Z06 Sting Ray, both #614.  In 1967, Bob led the GT Class at Le Mans with co-driver Dick Guldstrand in a stock L88 Corvette Sting Ray until retiring at the 15th hour.

In 1967 while driving a McLaren CanAm car at Watkins Glen, Bondurant was seriously injured in a horrific crash when the steering arm failed at 150 mph. While recuperating in the hospital, he began drafting ideas for a high performance driving school. After a full recovery, he opened the Bob Bondurant School of High Performance Driving in 1968 at the Orange County International Raceway. Forty three years later, Bondurant has graduated more than 500,000 students ranging from celebrities, military officers, professional race drivers, teens and driving enthusiasts to be better, safer drivers at his facility in Phoenix, Arizona.

“Like most racers, I started on ground zero. I am an original California hot-rodder turned WHITE HOT when I started winning everything in my Corvettes,” said Bondurant. “My Corvette race record reflects winning National Corvette Driver of the Year and the big launch pad with Carroll Shelby. I went on to win Le Mans, was the winningest driver on the American team, the first and only one to win the World Manufacturer’s Championship, and lived my dream to be a Formula One driver and work for another legend, Enzo Ferrari. Being inducted into the Corvette Hall of Fame is my moment to honor and express my humble appreciation to the #51 and both #614 Corvettes that whispered to me after each win: ‘It’s your destiny to be a champion, now go live your dream’ . . . and I did.”

Ralph Kramer was one of the first Chevrolet executives to bolster GM support for the Corvette Museum in its founding years. He helped the museum gain stature with the management of Chevrolet-Pontiac-Canada Division, providing several major contacts which were developed and established, opening doors and helping to preserve history. Through Kramer’s contacts and influence, many individuals both inside and outside GM became aware of the Museum’s mission, and many current Corvette Hall of Fame inductees were introduced to the museum by Kramer. He found ways to create Chevrolet media events that got the Museum noticed around the world. Although its official independence from GM was a constant, Kramer’s quiet work with Chevrolet General Manager Jim Perkins on behalf of the Museum saw it survive and grow.  Had it not been for Kramer, the one-millionth Corvette likely wouldn’t be a museum display piece today. He served on the NCM Board of Directors from 1990 to 1998.

Kramer was a reporter for The Indianapolis News before joining GM in 1973. During his tenure in Chevrolet public relations, he managed Chevy’ pace car and race engine presence at the Indianapolis Motor Speedway. He left GM in 1995 to become the Speedway’s public affairs director and director of the Hall of Fame Museum.  In 1998, he formed TheKramerCo., a PR and marketing firm. He helped found the “Corvette Enthusiast” magazine, where he was a columnist. Since then, he has authored two books about the Speedway, “100 Years of Racing” and “A Century of Excitement.”  He and Jerry Burton, a 2014 Hall of Fame inductee, co-wrote the widely acclaimed “100 Years of Chevrolet” book for Automobile Quarterly.

“Though I left GM in 1995, I have remained involved with the National Corvette Museum ever since,” said Kramer. “They say you come for the car and you stay for the people, and that’s definitely true with Corvette. Coming to events in Bowling Green brings back great memories and it’s an opportunity to share Corvette history with those new to the hobby. I’m looking forward to the 22nd Anniversary Celebration and Corvette Hall of Fame induction Labor Day weekend and the opportunity to be inducted into a group of Corvette elite.” 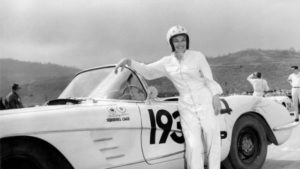 Affectionately known as “The Lady in Pink,” the late Donna Mae Mims became a true Corvette enthusiast from the first moment she spotted one, a 1957 Corvette, for sale on a dealership lot. At the time she and husband Mike had never heard of the model, but ended up purchasing a brand new one from Don Yenko Chevrolet. An invitation from a fellow motorist to a sports car meeting is what got Mims involved in SCCA, and in 1961 she started racing, winning the B Production ladies race that same year at Cumberland. While Mims liked her Corvette, she was not fond of the color. Her husband would not let her paint it pink, so she painted ‘Think Pink’ on its side. Her subsequent race cars bore the same name, while Mims sported pink coveralls, a pink crash helmet, and full pink wig behind the wheel. In her championship driving year, she was part of the Yenko/Chevrolet race team that dominated A/Production and B/Production SCCA racing with Corvettes, all while she was driving her little pink H/Production bug-eyed Sprite.

Her dedication to racing was not only recreational, but also professional, serving as Manager of Hi-Performance at Yenko Sports Cars. Her duties included helping other racers specify parts and even find sponsors, and her “company car” was a 1969 L88 Stingray. Mims freelanced as a writer for several car magazines, including Competition Press, Corvette News, SCCA’s Sports Car, and Sports Car Graphic magazines, among others. She participated with an all-female team in the 1972 Brock Yates Cannonball Sea-to-Shining-Sea Memorial Trophy Dash, driving a Cadillac. Adrienne Barbeau’s character in the Cannonball Run movie was based on Mims.

After retiring from racing in 1974, Mims stayed busy as a worker in Race Control at three Ohio race courses, and remained active in events of the Steel Cities SCCA Region, Corvette Club of Western Pennsylvania, Three Rivers Corvette Club (which she founded), Steeltown Corvette Club, and the Tri-Rivers Car Club Council. Sadly, Mims passed away on October 6, 2009 at the age of 82. Fittingly, her body was displayed in her pink 1979 Corvette during visitation at the funeral home, and a large group of forty plus Corvettes participated in the funeral procession.