At the 2021 Michelin NCM Bash, a key handoff ceremony was held for Jack and Dor DeLong who graciously donated their third Corvette to the National Corvette Museum. Previously, these devoted NCM supporters donated two C4s that are already in the Museum’s collection. The new donation is a 1998 C5 Corvette that is a wonderful addition. This car has a connection to Dale Earnhardt and has a very touching back story. With it being the 20th anniversary of Dale Earnhardt’s passing in February, the timing of this donation was very fitting. At the ceremony, Director of Collections/Curator, Derek E. Moore shares that “it is a very significant moment in time to remember Dale and what Jack and Dor have done to this car to honor Dale’s memory.”

When the C5 Corvette came out, Jack just “had to have one.” The DeLongs ordered their 1998 C5 Corvette in September of 1997 and it was in their possession by November 1997. They have been the only owners of the cars since then. In 1999, the DeLongs attended the National Corvette Museum’s fifth-anniversary celebration. Jack shared that attending this event “opened their eyes to what the museum could be for them.” The DeLongs woke up early just to make sure that they could be the second car in line behind Dave Mclellan, to finish the trek to Bowling Green during the Caravan.

In 2003, the National Corvette Museum chose 100 Corvettes to participate in a tribute for Dale Earnhardt event in North Carolina where they visited Earnhardt’s facility. Jack was a big Earnhardt fan and was also present for his passing, so he submitted their 1998 C5 and it was chosen as the 23rd car for the tribute. After the car was chosen, Jack felt like he had to do something special. She had an airbrush artist paint under the 1998 Corvette’s hood to further honor the memory of Earnhardt. Jack shared that it was a “wonderful memory” to have so many people from Earnhardt’s facility come out and look at the tribute art on their Corvette. As the opportunities would arise, Jack collected signatures on their C5. The car has 24 legible signatures that are all from the “who’s who” of Corvette.

The DeLong’s have owned their 1998 C5 Corvette for a little over twenty-three years and it has been a very significant car in their lives. Through owning this car and participating in Museum events, the DeLongs have formed wonderful friendships with people across the country and relationships with car clubs. Of all the cars Jack DeLong has owned, this 1998 is his favorite and will “always be his baby.” They hope that the donation of this special Corvette reveals how much the Museum and Corvette truly mean to them. The DeLong’s feel that the National Corvette Museum is the perfect home for their cherished ’98. 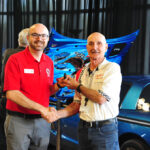 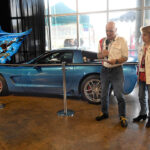 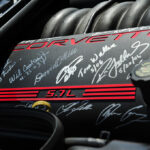 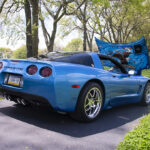 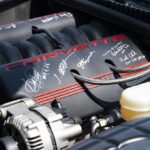 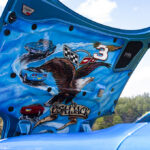