“There were five of us, and it’s a two-seater, so it really was a car for mom and dad.”

Daughter Melanie remembers how beloved the car was by her dad, Carl Whitlow, and how her and her sister were not allowed to drive it. “I think we all got to drive it once. He and mom would go up on the Parkway or Skyline Drive with the top down. Dad loved it. And it didn’t go out of the garage if it was raining, or it had rained, or it was threatening to rain. There were a couple of times he’d be like ‘let’s go get lunch’ and I’d be like ‘can we take the Vette?’

Wife, Sharyon, reminisces about her rides with husband Carl. “We called ourselves Gert and Gary Geezer and we would ride on the weekends. Some days we would ride for six or eight hours, just enjoying the top down.”

Carl’s love for Corvette started decades earlier, when his dad was the Service Manager for a Chevrolet dealer in Richmond, VA. “When the first ’53 Corvette came into Richmond, it came to that dealer and my husband got to sit in it… and that was all she wrote. He was a fan from then on.”

Carl didn’t become a Corvette owner until 2004 when they purchased a 1990 Corvette. “We did a CarFax and found that the car’s first stop was Indianapolis. That’s what piqued our interest in tracking it. We spotted it, fell in love and bought it.”

For the May 27, 1990 Indianapolis 500 the Chevrolet Beretta was chosen to serve as Pace Car, with it being driven by Chevrolet General Manager Jim Perkins. But the Beretta did not have a convertible top, so Corvettes were used as the official ‘Festival Parade’ cars, driving drivers and dignitaries.

“Dad had put in so much research in finding out this was one of 50, and one of those [Indy 500] Parade Cars,” shared Melanie. “After he passed, mom was like ‘I don’t know what I’m going to do with these cars.’ And I said ‘Mom, just call the Museum. The worst they can say is ‘no, we’re not interested.’”

Sharyon reached out to Museum Curator Derek Moore, who was excited to accept the donation.

“Carl died a year ago in October and the car sat parked in the garage. I could not imagine selling it to somebody,” said Sharyon, who said the experience brought a mix of emotions. “It was the first Corvette that he owned, and he loved it. We drove it, we didn’t put it in the garage and leave it. I think this is the right decision for us and the car. And I think my husband would be thrilled at the prospect that his car would be here.”

Daughter Melanie echoed her mom’s sentiments. “She put it off, but finally she called. And I’m glad she did because I think Dad would enjoy knowing that his car is here for everybody to enjoy. He could brag about it a little, too.”

The Indy 500 decals had been removed from the car prior to Carl purchasing it, however, the Museum will be bringing the car back to its original look.

Thank you to the Whitlow family for their generous donation and for honoring Carl by preserving this piece of Corvette history. 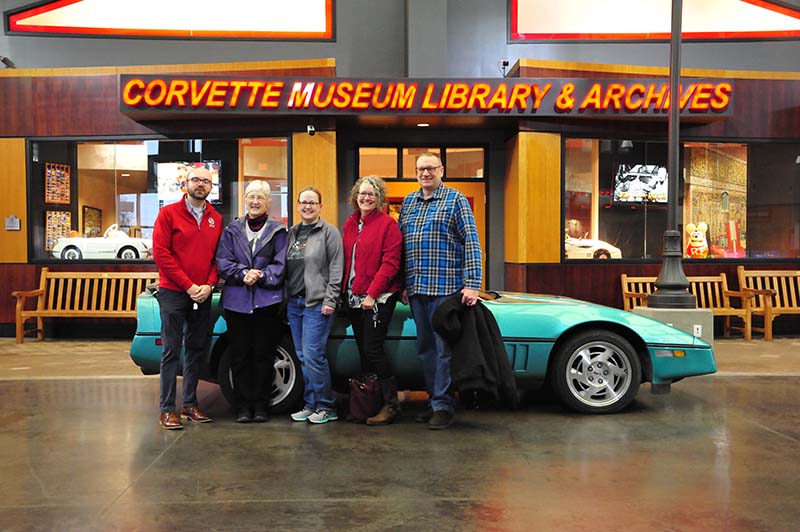