On Tuesday, June 30 the National Corvette Museum received a donation of a 1988 Corvette, a car the donor had owned for about ten years. But it wasn’t until he inquired about donating it to the Museum that the history of the car started to come to light. 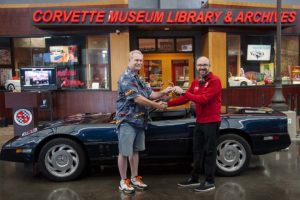 “My dad purchased the car about 10 years ago at a car dealership in lower Michigan and enjoyed it,” shared son, Lars Wallace Jr. “The car had 200,000 miles on it at the time. We enjoyed it for about five years, and he picked up a couple more Corvettes that he’d rotate through. Now he’s getting up there in age a little bit and we thought we’d thin out the herd.”

The Wallace family had visited the Museum several times and were aware that the Museum regularly received vehicle donations. “Dad said he was thinking about donating the car, so I talked to him about it. We brought the title by the Museum in February to get it researched and to see if the Museum would be interested in the car. They looked it up and found out it was a Miss America pageant car.”

In pulling the build sheet on Lars Wallace’s Corvette, a Chevrolet Motor Division internal memo was attached with the subject ‘1988 Miss America Corvette Convertibles’ dated August 7, 1987. On the memo, five order numbers and VINs were listed with the cars to be shipped to Chevrolet Central Office – Show & Display for upcoming auto shows in 1988. Included on the list was Lars’ VIN.

“I was the first Miss America to enjoy a whirlwind of a year with one of our national sponsors, Chevrolet Motor Division,” shared Miss America 1988 Kaye Lani Rafko Wilson. “I recall during the week of competition a gentleman from Chevrolet came into the rehearsal hall and mentioned to all of us how excited they were to be a part of the Miss America organization and that the newly crowned Miss America, which would be crowned that Saturday, would go home with her very own 1988 red convertible Corvette.” 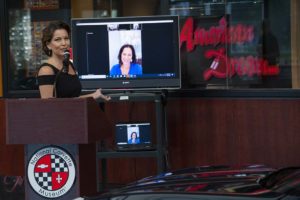 “GM/Chevrolet became a sponsor in 1988, so various Miss Americas would get a Corvette after they were crowned,” shared Heather Renee French Henry, Kentucky’s only Miss America and titleholder for 2000, who was present at the donation ceremony. “Corvette was present at a lot of appearances throughout the year and of course, Corvettes, even still today, are present at the famous ‘Show Us Your Shoes’ parade at the Atlantic City Boardwalk.”

“My sisters and I are deeply appreciative of the many sponsors that have been able to help us through the years, but Chevrolet was one of my most favorite,” added Kaye Lani. “I still have my Corvette and absolutely love it.”

The 1988 Miss America Corvette donated by Lars Wallace, is Dark Blue Metallic and has nearly 225,000 miles on it.

“I think it’s just amazing that a car like this, with a non-rebuilt engine, can have over 220,000 miles on it. It illustrates the reliability and durability of GM cars,” shared Lars Jr. “Every Corvette is special. It just turns out that this one is a little more special than the common one. We hope that we have an exhibit here in the future focusing on the Miss America cars.”

Thank you to Lars Wallace, and Lars Wallace Jr. for their generosity and help in preserving the history of Corvette!