Michael (Mike) Moss started off life as a self-proclaimed motorhead, even as young as 13 years old. When he turned 16, he had his sights set on road racing, but a minimum age of 21 pushed him towards drag racing. Never mind that the minimum age for that was 18 – it didn’t stop Mike in his Super Stock K Camaro.

Work would take Mike away from his beloved hobby and the United States, as his career of running an international trading company put him in Africa, the Middle East and Asia for 35 years. But in the past ten or so years, Mike’s career has allowed him to stay stateside, giving lectures at the U.S. Naval Academy and U.S. Naval War College, also bringing him back to the hobby that he loves.

“I bought a 1965 Corvette Roadster in the mid-2000s and started racing that,” shared Mike. “Close by me, there was a race shop that had a DeAtley Trans Am car in its stable, and I fell in love with it the minute I saw it.”

The DeAtley Trans Am car was one of four built, and three still exist. Businessman and Financier Neil DeAtley owned the cars as part of a factory backed professional racing team, competing in the SCCA Trans Am series. The DeAtley team had won first, second and third place in the 1983 series championship with Speedway Camaros when in 1984 GM asked them to switch to the new Corvette. “By the time all negotiations were finalized, they had only eight weeks to design, build and test the new Corvettes,” wrote Wayne Ellwood in an article for Vette Vues.

This was not only the first of the full tube frame Corvette race cars that now comprise the majority of racing Corvettes, but the car also marks the return of factory backed Corvette race cars after many years of absence. The bodies were modified at Corvette Creations in Portland, OR and believed to utilize original C4 race panels developed by GM for general use in both IMSA and Trans-Am. The panels offered more clearance with their widened out front and rear, and were manufactured as a special run by Diversified Fiberglass. With little development time, the team had some issues getting the new IRS-style suspension to work. 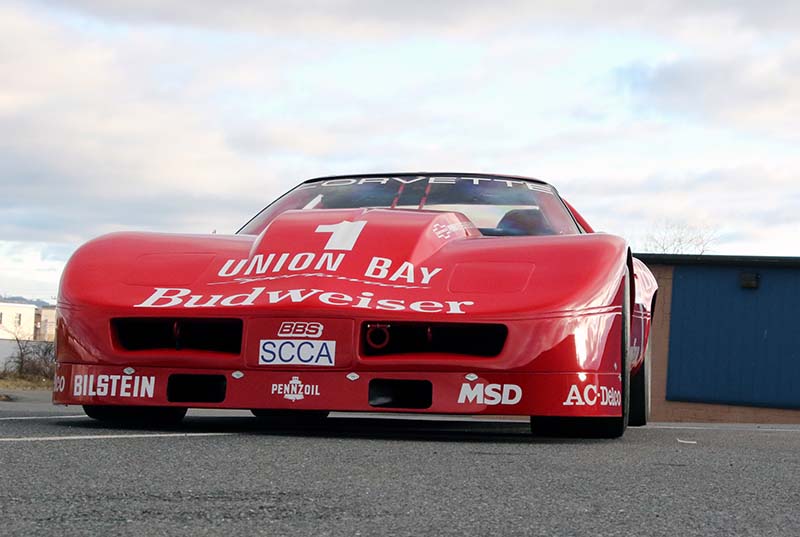 The DeAtley Trans Am Corvettes were driven by world-renowned race drivers including the likes of David Hobbs (today, a motorsports commentator), Michael Andretti, Darrin Brassfield, James Insolo and Wily T. Ribbs. Competition was stiff, and the new Ford Capri was proving its competency on track, earning the manufacturer’s title that year. With the fleet of DeAtley Corvettes having been stripped down to be refreshed for the next season, they were ultimately reassembled and put up for sale. The car would change hands a number of times, and nearly 20 years later end up with Mike Moss. Mike then prepared the car to go vintage racing.

On its first race outing during Mike’s ownership, at Watkins Glen, it was damaged. The next 4-5 years were spent restoring it on and off. “It’s pretty immaculately restored, and I didn’t particularly want to see it go back on the racetrack,” shared Mike. “The restoration was spearheaded by Scott Michael. The master artisan who did the body work and painted it is a Portuguese immigrant to the United States, Tony Fernandez of Easton, Pennsylvania. He’s the most fabulous painter ever. If you look at the car, you’ll see the reason why I couldn’t race it as he did a magnificent job on the body work and paint. It’s absolutely spectacular.”

Mike shared that the car looked so good, he didn’t want to see it get dinged up on the racetrack. “At this time in my life, I’m finding it very personally rewarding to ‘give back’ after having a successful career. Rather than sit in my race shop under a cover, it’s America’s Sports Car and truly a piece of Corvette history, especially in the mid-80s. America should have a chance to see it, so I donated it. I wanted to share it with the nation and Corvette enthusiasts around the country, and the only way to do that was through the National Corvette Museum.”

Though Mike has given up his beloved 1984 DeAtley Trans Am Corvette, he’s not given up on his hobby. Still active in racing, he competed at Sebring in late February, racing a Lola T-70 Mark III B. In March, he took to the track in Atlanta piloting his vintage ’65 Corvette Roadster in the SVRA Pro-Am Challenge, sharing driver duties with former Corvette Racing driver Max Papis. He also owns other vintage race cars including a Lola T-163 Can-Am car, previously driven by Peter Revsen. Mike also owns the Gordon Johncock 1966 Gerhardt Indy car, and a 1969 Santa Ana Gurney Eagle Indy car driven Denis Hulme.

The car will be back on display at the Museum beginning in April as the Performing and Racing Gallery will be reopened to the public following a five-month remodel. A formal grand opening ceremony is slated for Thursday, April 23 at 3:30pm as part of the Michelin NCM Bash.

For an in-depth history on the DeAtley Corvettes, pick up a copy of the March and April 2020 issues of Vette Vues magazine. Special thanks to Bonnie Wolf, editor of the magazine, for allowing us to utilize information from their research.