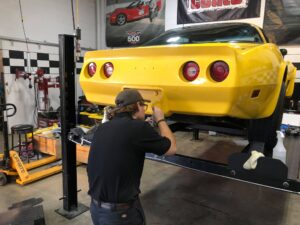 At the National Corvette Museum’s 27th Anniversary Event, Derek E. Moore, Director of Collections and Curator, joined Zach Bredfield, Preservation Intern, to discuss “Rebuilding the 1979 Engineering Development Corvette.” Bredfield was the 2021 Summer Preservation Intern from McPherson College, located in Kansas. Bredfield is currently pursuing a Bachelor of Science degree in Automotive Restoration with an emphasis in History. Zach, influenced by his grandfather’s passion for cars, has been a Corvette fan since he was a child.

During his internship, one of the many projects he was assigned to was working on the 1979 Engineering Development Corvette. When Zach arrived at the Museum back in May, the body and frame were separated, but the cracked front fender had already been repaired. Some of the tasks Bredfield performed himself were mating the body to the chassis, fully installing all interior components, touching up the paint, wet sanding, and polishing the entire car.

The collections team set out to preserve the 1979 Corvette and not necessarily restore it. The team guided Bredfield in the preservation process, and Bredfield quickly learned that it is a different process from the restoration. This allowed him to develop stronger mechanical skills. On the last day of Bredfield internship, they were able to install a new engine. The engine used was as close as possible to the original, but they were able to use many original parts that were periodically appropriate. 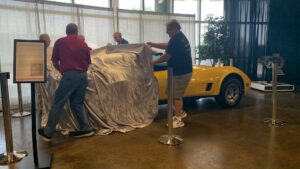 During Bredfield’s preservation internship, he was exposed to many different opportunities. He was able to attend the Cincinnati Concours, deliver a car to Washing D.C., and attend the Keeneland Concours. He also spent time learning how to revive cars, perform car show prep, shutdown procedures, and Museum level conservation. Bredfield found it to be extremely educational and fun to be exposed to a new level of work that he had never been exposed to prior. Bredfield is now able to be a voice at his college about museums and preservation methods because of his time spent at the NCM. The preserved 1979 Corvette was unveiled during the presentation to show Zach and the team’s beautiful work!

The entire seminar is available to event registrants and members on the members-only section of the website.