By Corvette MuseumSeptember 11, 2020No Comments

For David Duggar, his love of Corvette started at an early age when he was gifted a toy model.

“The connection started when I was really young, probably around six or seven, my aunt bought me a model car,” said David. “It was already put together, a metal car. It was a ’54 Corvette, and it was white. I fell in love with them back then.”

Whenever David would see a ’54 Corvette it would remind him of his aunt. 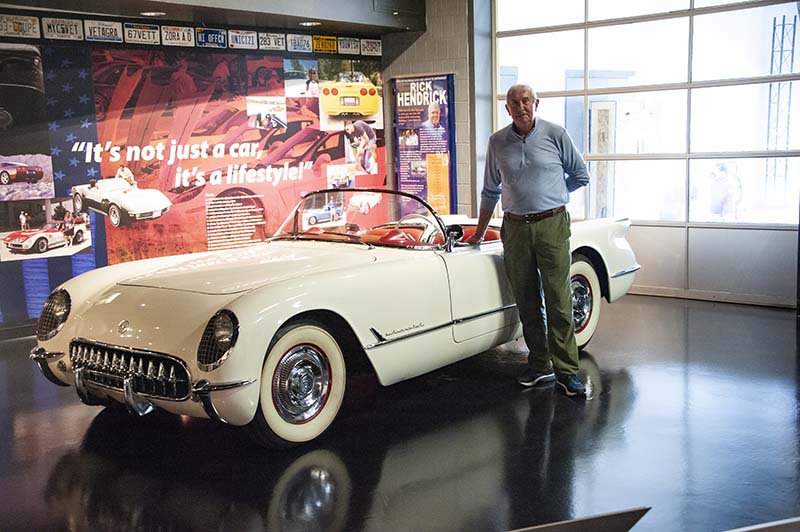 “I really enjoyed my aunt very much and it was very special to me, remembering her. That’s one of the things with this car, the first thing that came to mind when I saw it.”

David shared that he had always wanted a Corvette.

“I ran across this one when we were in San Francisco, California on vacation and had to have it. My wife said, ‘go ahead if that’s what you want.’ We purchased it then in the early 2000s and had it brought back from California to Knoxville, Tennessee. I’ve owned it ever since.”

Since owning the Corvette, David has not only appreciated the car, but shared it with others so they could, too.

“We’ve enjoyed it. It’s been at the house and then we had it in storage at Reeder Chevrolet in Knoxville, TN. They’ve had it in their showroom so that other people could look at it and enjoy it.”

David has been a customer of Reeder Chevrolet for more than 10 years, previously purchasing vehicles for the business he used to own, and that relationship is what would eventually plant the seed for him to donate his Corvette to the National Corvette Museum.

“I deal a lot with Corvettes and I sell a lot of Corvettes,” shared Rick Boggs at Reeder Chevrolet “The East Tennessee Corvette Club meets here at Reeder Chevrolet, so I’m familiar with the Museum and what they do. And I know people donate cars to the Museum, so I suggested it might be something he might want to do.”

That suggestion would eventually lead to David’s September 2020 donation of his 1954 Corvette.

“I’d been to the Corvette Museum once before and really didn’t think about it until one of the gentlemen at Reeder talked about donating it. And I thought that was a really great idea for other people to look at it and enjoy it. Maybe it will bring back some of their memories.”

Thank you to David Duggar for his generosity, and to Rick Boggs at Reeder Chevrolet for helping promote the Museum and our cause!