Willis Stolper was a quiet, unassuming man. So it was a bit of a surprise that he would purchase a car as attention-grabbing as a Corvette. But when you learn a little about Willis, and the fact that he served in the Navy during WWII, fighting every battle in the Pacific on the USS Enterprise, then it’s not surprising that he would seek out America’s Sports Car. After all, the American troops who fell in love with the European sports cars during the war are the reason we now have the Corvette.

It was the early 60s, and Willis was working for a garden implement company as a shipping foreman, often repairing and restoring lawn mowers on the side. He was quite intelligent and loved machines. He purchased the blue beauty, a 1958, and was the second owner. He joined a Corvette Club, and later in life would take his car to local shows. “He was proud of it and loved to show it off,” brother-in-law Walt Friedemann shared.

The life-long bachelor spent many years living on his family farm in the country, in the small town of Sheboygan County, Wisconsin. He was a historian and a genealogist, sought after by many in the area who were interested in information on their family tree. “Anybody who needed to know anything about the area would come to Willis. He was a remarkable person, even though he was so reserved and quiet.” Friedemann shared.

Willis not only owned a Corvette, but also an Indian motorcycle, an airplane he flew, and an El Camino – his daily car. Though he had never been to the National Corvette Museum, one of his wishes was that his Corvette be donated upon his passing.  “So many people wanted the car, but he said it should go to the Museum, both to preserve it, and so that no one would be unhappy,” Friedemann said.

Sadly, Willis passed in March of 2015 at the age of 92. “He had his memory, and it was great until the end. The family is pleased to honor his wishes. The car belongs at the Museum.”

Thank you to the Stolper family for entrusting us with Willis’ prized possession. We look forward to sharing his Corvette with many visitors to come! 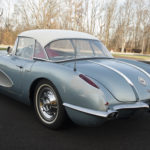 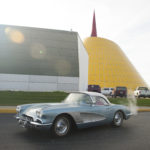