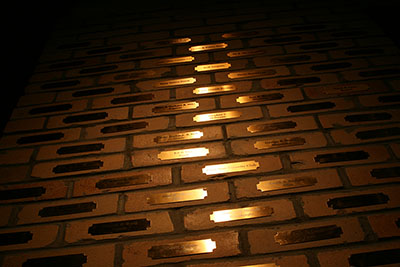 Add your name permanently to a special display in the St. Louis Assembly Plant area of the Museum!

You can have your name, business or Corvette club name engraved on a signature plate and attached as a permanent fixture incorporated into the Flint brick wall of the St. Louis Corvette Assembly Plant display of the Museum. This permanent display is limited to only 620 usable bricks and each brick space reserved in the display area wall will be recognized with certificate of authenticity.

Reserve your space on the Flint brick wall by donating $250.

The Flint brick wall display is incorporated into a very significant area of the Museum and will be a lasting way to recognize our fundraising supporters. The display is limited to only 620 spaces. A similar wall display may be added to the Museum’s new addition at a later date.

The brick plates will be arranged on the wall from the center out, and are available on a first come-first serve basis. Proceeds from the Flint brick display wall benefit the Museum’s exhibits and displays.

The historic Flint bricks used in this display are bricks from the GM Assembly Plant where the first 300 – 1953 Corvettes were made in Flint, Michigan. This building was razed in 2003, and General Motors has allowed us the opportunity to use them as a fundraiser for the building addition. Reserve your spot while space is available.