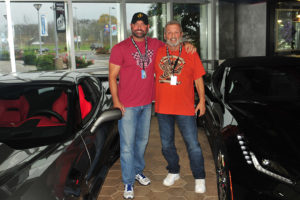 Tony Rosenbum (at left) gifts his dad Roger with a 2016 Triple Black Stingray Corvette. Both took R8C Delivery of their new rides.

For Tony Rosenbum and dad Roger it’s not unusual to travel cross-country and meet-up for a concert or other trip together. What was unusual for this trip was that Tony was not exactly up-front with his dad on everything this excursion entailed. Tony, a career United States Marine (retired) who now owns Motova8, Inc., a leadership seminar company in So. Cal., has been planning this special day for about two years.

“Every now and then I grab dad and take him on an excursion,” said Tony. “We travel somewhere – typically a concert. We like music. I never tell him what it is. I just say ‘hey we’re going, trust me’ and he always does. I told him we’re going to do something different this time for music. I never told him we were going to see a concert because I didn’t want to lie to him. So the ‘music’ is his new XM Radio.”

Tony told his dad that before their music portion of the trip, they were going to stop by the National Corvette Museum for a tour. “He was all excited,” Tony said. What Tony didn’t tell his dad was that one of the cars on the Museum’s Corvette Boulevard was his, and the one sitting next to it was Tony’s.  “I’m in a fortunate position that I got to buy my father a brand new car,” Tony said.

Tony ordered the cars from Karl Johanson of Sunrise Chevrolet, Buick, GMC in Collierville, TN. But how did he know what his dad would love? He played a little game with his dad, asking him what his dream car would be, “Of course he says Corvette… so I get all that information out of him without him knowing why and I ordered him that exact car.”

“I thought it was for him or his son,” Roger said. “And I just rattled off what I would want, and its here. It’s out there right now.”
It’s not surprising that Roger is a Corvette fan as he retired from General Motors after working in Flint, MI for 38 years. His Corvette of choice? A 2016 triple black Stingray Convertible. This is Roger’s second Corvette – his first was a 1958 painted Candy Apple Green that he owned for just a few years.

Tony chose a 2016 Shark Gray Z06 Corvette for his R8C Delivery and it’s the second Corvette he has owned. His first was a 2003 50th Anniversary Corvette, purchased while on a Navy ship on his way back from Iraq. That’s how Tony came to know dealership sales consultant Karl, who accompanied them during their R8C Delivery.

“The 50th Anniversary had just come out and I knew I had to have one. I had been saving my money and was looking online for a dealer that had one in stock. The car was in such high demand that GM wasn’t offering the military discount on it, but Karl hooked me up anyway.”

It was both Tony and Roger’s first trip to the Museum. “And it was truly amazing. The staff was exceptionally amazing. They really did an extraordinary job,” Tony added.

“I don’t know who’s happier, between him and I,” Tony said. But Roger was quick to chime in, “I am.” Tony was just as quick to reply that it was his pleasure to make this happen.

So how did they pull one over on dad? “So after our V.I.P. tour I said, ‘Well, it’s time to tell dad about the music piece.’ Earlier I had Shane give me the FOB so I pulled it out and said, ‘the music selection tonight is XM Radio on that car.’ Then I said to my dad, ‘that’s your car.’”

“You did cry a little,” Karl laughed.

“You know, life is short, and I have the ability to do it. And I wanted to do it,” Tony said. “Dad and I have been wrenching on cars our whole lives. I worked on a car with him when I was 12 years old. The first car we built together was a 1974 Chevy Vega. We put a small block in it. That was where my passion for cars began, growing up with dad, a GM guy, a Chevy guy. I’ve always loved cars and he passed that down to me. This is my give back.”

It’s people like the Rosenbum’s who carry on the car hobby and the Corvette passion. Thank you, Tony and Roger, for sharing your special father-son moment with us!