Passing on a Piece of a Collection 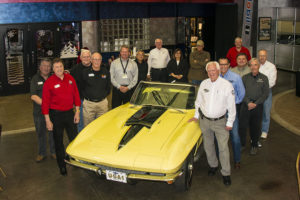 Henry Younger has always wanted to be a Corvette collector. He fell in love with Corvette right from the beginning… after seeing a 1953 Corvette and then receiving a small wood model version from his mother for Christmas. But it wasn’t until 1969 that Henry would own his first Corvette, a 1965 that he purchased in Alabama. It was a red base model convertible with red interior, white top and it got over 20 miles to the gallon. “It was something that when you rode down the road, everyone knew it was a Corvette,” said Henry.

Starting a young family, Henry had to put his dream of collecting Corvettes on hold, selling the 1965 and not purchasing another until 1990. From there, Henry bought, sold and traded Corvettes, working to build his dream collection, peaking at 11 cars. Eventually, his children joined him in the hobby, wrenching on the latest addition to the garage and attending car shows together. Henry and son, Charles, have been wrenching together for almost 40 years, and this summer they, along with Henry’s daughter, Carmen, each placed 2nd in their respective classes at a car show. Henry laughs, “They haven’t fallen far from the tree.”

On Monday, December 5, 2016 Henry surprised fellow National Corvette Museum board members by donating his 1967 Big Block. “I had talked to Gary Cockriel a couple of years ago about gifting the car, but didn’t know when I wanted to donate the car, and thought my final board meeting would be fitting. I really had a proud feeling when I drove it into the Boulevard.” Henry challenged fellow members of the board to make a similar, impactful contribution to the Museum upon the end of their tenure on the board.

Henry carefully selected this Corvette for donation for many reasons. “I have another that’s the same color, but a different engine. This ’67 is one of the most iconic Corvettes… it has correct L89 heads, close to 490 horsepower, had 64 miles on it when I traded for it, but now has only 379 miles. I hope the Museum can get it out and give rides in it. How many people can say they’ve ridden in a 1967 Corvette? I’d love to see the Museum use it, and display it.”

Henry is a Lifetime Member of the Museum, first visiting in 1995 and being elected to the NCM Board of Directors in 2011. Henry reminisced about his time on the board and the milestones he has been a part of, from the official reveal of the seventh-generation Corvette on 01.13.13, to the news headline making sinkhole, to the grand opening of the NCM Motorsports Park. Henry was the first to purchase an acre through the ‘Acre Club’ fundraising program to support the NCM Motorsports Park, and since then has purchased a total of five acres and sponsored a garage. “The sinkhole and track were big items we had to address.”

According to Henry, it is the family atmosphere of the Museum, the same faces you see during visits, and same smiles, that bring him back. “The Museum makes you feel like family, and if you have a Corvette you are a part of the family.”

Thank you to Henry for helping grow the Museum with the donation of this beautiful piece of automotive history. We look forward to many more family reunions with you!