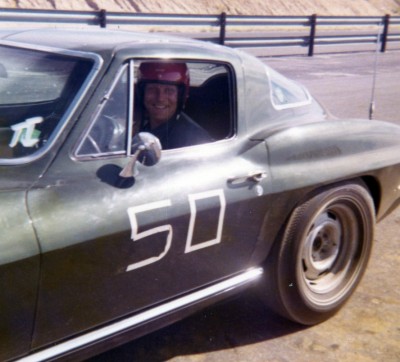 Bill Engle in the 1967 Corvette he donated to the Museum

William (Bill) Engel, Jr. a.k.a. “Sweat Hog” of Albany, NY; Ridgewood, NJ and now Summit, NY has owned three Corvettes, equally spaced 20 years apart and each with its own memories. The first was a 1967, bought May 24, 1971 as the third owner. “At the time of purchase the engine was dismantled and there was a swallowed valve which had put a hole in the #7 cylinder,” Bill recalled. “I rebuilt the engine and put a sleeve in the #7 cylinder. The car was functional and on the road by 1972,” he added.

Bill joined the Tri Vettes Ltd. Corvette Club of East Greenbush, NY and while in the club he raced the car on closed course tracks and in road rallies. He was one of the members that was instrumental in winning the North East NCCC Championships in 1974. Today, the car is still road worthy and about 85% original.

In 1986 Bill purchased Corvette number two… a 1987 Coupe that he picked up from McGuire Chevrolet in North Bergen, NJ on New Year’s Eve. It was his daily driver for about ten years.

Finally, to complete his collection spanning 40 years, Bill purchased a 2007 Atomic Orange Corvette. The car had to be shipped from a dealer in Illinois to Hawthorne Chevrolet in New Jersey as it was the last one of this color.

Sadly, Bill was diagnosed last December with inoperable liver cancer. Like most Corvette owners, he didn’t want to sell his cars, and didn’t want anything changed on the 1967. “I had been a member of the Museum for awhile and had been reading articles in the magazine about recent car donations,” Bill said. “Donating my 1967 and 1987 was a good way to ensure the cars would be cared for.”

Thanks to Bill for his generosity and passion, ensuring the history of Corvette is passed down to future generations and enthusiasts to come!