‘Keepin’ Track of Vettes’ Through Donation 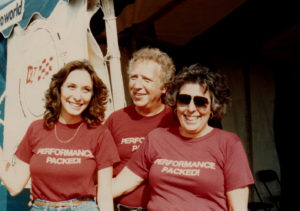 If you were a hands-on, do-it-yourself Corvette enthusiast, the guy who was restoring your own car or repairing or improving your Corvette in the late 70s through 80s, chances are you flipped through or even subscribed to Keepin’ Track of Vettes. Started in 1976 by Frank Kodl and his wife Fredi, the publication was purchased in 1981 by Bernie Finkel. Bernie was a car and race enthusiast and the magazine became a family business with Bernie as publisher, his wife Natalie as managing editor handling the sales and money end of things and daughter Shelli, a recent college graduate with a degree in English, serving as editor. In 1982 the family hired Ron Centra as art director, and he later officially became a part of the family as Shelli’s husband.

The Finkels became heavily involved in the Corvette hobby, rubbing elbows with Larry Shinoda and Dave McLellan, attending shows like Bloomington Gold and Corvettes at Carlisle, sponsoring a number of Corvette race cars and even heading up Corvette corrals at many tracks. For them, it was never meant to be a money making endeavor, but more about the hobby.

“His favorite thing about Keepin’ Track was the race track,” remembers Shelli. “He only ever owned one Corvette… a 1969 that he bought when we bought the magazine. He loved cars, Corvettes and racing, but he only ever owned the one, and I was the one to drive it.” 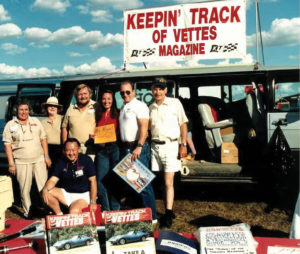 Shelli Finkel Centra with Dan Gale, Larry Shinoda, Jim Minneker and some other folks at Daytona in the late 80s.

Bernie was a lover of exotics, having owned a Masarati Ghibli, Jaguars, Alfa Romeos and a Lotus Elan. “He built a three-car garage and he always had different cars in different states of disrepair, or restoration. And he used them.” Husband Ron echoed Shelli’s sentiments, “he drove them hard and allowed them to be driven.”

Sadly, Bernie’s life was cut short in a freak accident while working on his Delorean in his driveway at home in 1986.He was only 48.

The family continued to run the publication for five more years, and in 1991, Natalie sold the publication to Dobbs Publishing (also the publishers of Corvette Fever, among other magazines) who then shut production down and transferred some of the magazine’s best writers (like Noland Adams), and incorporated the trademarked column names into Corvette Fever. The subscriber base for Keepin’ Track of Vettes was also absorbed by Corvette Fever. “It happened very suddenly. We were in the middle of producing an issue when we found out it was sold and we couldn’t do anything. We moved everything into mom’s basement, including ourselves because all of a sudden we had no jobs, no money, no nothing,” said Shelli. With a five-year non-compete clause in the sales contract for the magazine, Shelli and Ron were forced to find new careers.

Fast forward 25 years later. “Mom was moving and she had all this stuff. We literally had packed up the whole office and just shoved it into storage and we didn’t know what to do. It was like a look down memory lane. Pictures, press kits. We asked ourselves ‘should we sell it?’ We didn’t know the value, and it just didn’t seem right,” said Shelli.

Shelli messaged the Museum’s Facebook page in July, asking if there was any interest in the items she had, and in August she delivered a van packed with boxes full of Corvette history and loaded them into the Museum’s trailer at Corvettes at Carlisle where they would make the trek to Bowling Green to their new home. 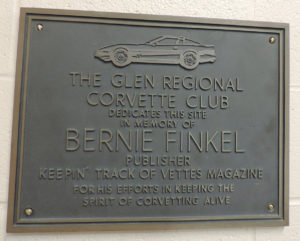 “When the sinkhole happened, I saw something about it on Facebook and I’ve been following the museum ever since. And it just seemed like the right thing to do,” said Shelli. “Where else would this stuff be appreciated? Even though Keepin’ Track only existed for those few years, I think it was important to the Corvette world at the time, and I would love for it to just be remembered and not be forgotten and hopefully through you guys, it will be.”

Fittingly, the items are now housed in the Museum’s Library and Archives. A place that proudly bears a dedication plaque in memory of Bernie Finkel, erected by the Glen Regional Corvette Club more than 20 years ago.