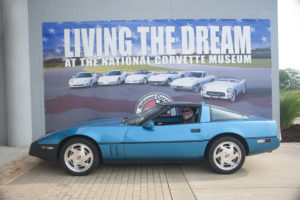 Ike Dodrill drives his brother, Jim’s Corvette into the Museum.

It was April 22, 1989 – 100 years after the Oklahoma Territory Land Run and many in the Sooner State were commemorating the occasion with various deals and specials. One such promotion was at the Chevrolet dealership in Oklahoma City, which advertised all cars on sale for only $89 over invoice. Jim Dodrill saw this as the perfect opportunity to score a much lusted after Corvette. Luckily, the lot had three to choose from, and it was a brand new 1989 Medium Blue Metallic Corvette that he brought home.

Younger brother, Ike (Lifetime Museum Member), fondly remembers the day Jim came home with the car, and the memories that were made over the next 20 years. “We took many trips in that car… to Bloomington Gold, it’s been driven in the Caravan, and several times to the Lone Star Corvette Club event at the Texas Motor Speedway.”

Sadly, Jim suffered a massive heart attack in 2009 and unexpectedly passed away. Over time, Jim’s widow, Sandra, and son, James, decided the car might make a good vehicle for James to drive. It wasn’t running at the time so Ike stepped in to fix it, and before long James was driving the Vette. As with most cars over 20 years old the Corvette started to have issues. James reverted to driving an old truck until it hit 200,000 miles and was ready to be retired for something more reliable. Sandra thought trading in both the Corvette and truck for something newer would be best – prompting Ike to issue a proposition. “I asked if I could buy the car, get it running and then donate it to the Museum in memory of Jim. The car had 28,000 miles on it,” Ike said. “They discussed it and decided it was the best thing to do.”

Ike rebuilt the headlight motors, alternator, replaced the fuel pump/sender unit, fuel injectors, cleaned the throttle body, replaced the top, changed out plugs, wires, ignition system, coil cap, and gave it a basic tune up, a new battery and new tires. “I essentially tried to make it as reliable of a car as we could with the hope that the Museum would be able to use it for any kind of parades, track events, VIP events, anything like that,” Ike said. “My hope is that you guys will have some wonderful times with the car, too.”

When asked what Jim would think about the car’s new home Ike can’t help but smile. “I think he’s up there smiling right now, looking down on us. I think he’s very pleased. I am. I think this is a wonderful thing that we can do for the Museum and I hope that more and more people are able to do the same thing.”

Thank you, Ike, for your generosity and dedication to seeing Jim’s legacy live on. We are sure there are many more memories to be made with the car.