From Your Family to Ours

Home » From Your Family to Ours 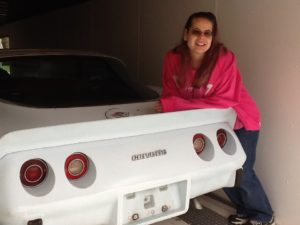 When describing Paula Lizotte’s love for her Corvette, to say she is an enthusiast is simply not a strong enough characterization. To hear her speak fondly of her car, you would almost think she was talking about a relative, best friend or even her daughter.

“When I got out of college where I studied plant science and horticulture, I got a job as the lady that went around to companies and took care of their plants,” Paula shared. “I got to visit all these different places and meet different people. But it was at a hotel that a delivery guy pulled up in his Corvette. You know how when you see a Corvette, you just love it, you want to touch it and run your hand over the curves, even though you shouldn’t? He let me sit in it and I fell in love.”

Paula married her high school sweetheart and when she told him she wanted a Corvette, his response was simply ‘save the money.’ So that’s what Paula did. “I had been looking for a very long time.  A Corvette is the kind of car that when you see it, you go ‘ahhhh.’ I worked really hard to get her. I overcame things to make her mine.”

Paula was sure what she wanted – a curvy Stingray, much like the one owned by the delivery driver at the hotel, and despite getting flack being a female shopper, she finally found one she liked not too far away in New Hampshire. After a bit of a stumble with a hacked transaction, Paula finally made the trek to see the car in person, bought her that day and drove her home. The next 10 years were full of special moments with ‘Betty.’

“She was registered for anytime I wanted to drive her, but I did not daily drive her,” said Paula. “She’s not a supermarket car. I knew I was taking her out when I took her out. It wasn’t always a special occasion but it was special moments.” Paula laughed, recalling the long winters in Massachusetts and having her ‘Betty’ tucked away in the garage.  “You’re going to think I’m crazy, but I would go in my garage in the winter, give Betty a snuggle, rub my hand over her curves and tell her, ‘soon, baby.’ It’s a weird kind of puppy love. It becomes a part of you. People may be like, ‘it’s just metal, it’s just a car.’ But you know what, those cars are peoples’ lives.” 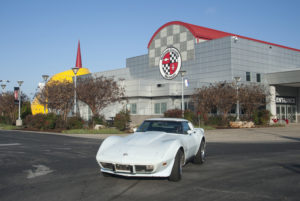 After many life changes including a home and a child, Paula knew it was time to seek out a new owner. “A classic like Betty requires a lot of time, love and maintenance.” After listing it for sale, it became obvious she was going to have a hard time finding someone with the same passion that she had for the car. “I started trying to sell her summer of 2015, but no one was serious about buying her. I wanted someone who loves her as much as I love her. I couldn’t manage all the expenses of keeping up a classic car properly. She didn’t deserve New England where a third of the year is spent in a garage.”

Though Paula had never been to the National Corvette Museum, it seemed like the best place for her Betty. “Being on a classic car email site I had heard about the tragedy at the museum [sinkhole]. When things settled down, I thought of you guys and I reached out.”

Paula contacted the museum and spoke with Gary Cockriel in the development department. “I picked up the phone, and the lady on the other end asked if we wanted a 1978 25th Anniversary Edition Corvette. It stunned me a little, but I quickly told her yes, that we’d love to take it off her hands,” Gary said. “Paula liked the idea that the car would be well cared for, and well loved.”

Knowing the day she would have to part with her Betty was coming, Paula has shed a few tears. “I’m giving up a little bit of me. She’s gone and I’m sad, but she’s gone to be a queen. As sad as I was that she’s no longer mine, I’m absolutely thrilled she’s yours.”

Paula’s daughter, 8 year old Kat, knows how important the Corvette is to her mom and is already making plans to visit the museum. Betty will be right here waiting for you, Paula. And hey, we might even give her a hug and tuck her in at night for you.

The Museum is open daily, 8am-5pm CT and is located at I-65, exit 28 in Bowling Green, Kentucky. You can come see Betty and about 80 other Corvettes on display for only $10 for adult admission, $8 for seniors age 62 and up, and $5 for kids age 6 to 16. Plan your next visit at www.corvettemuseum.org.