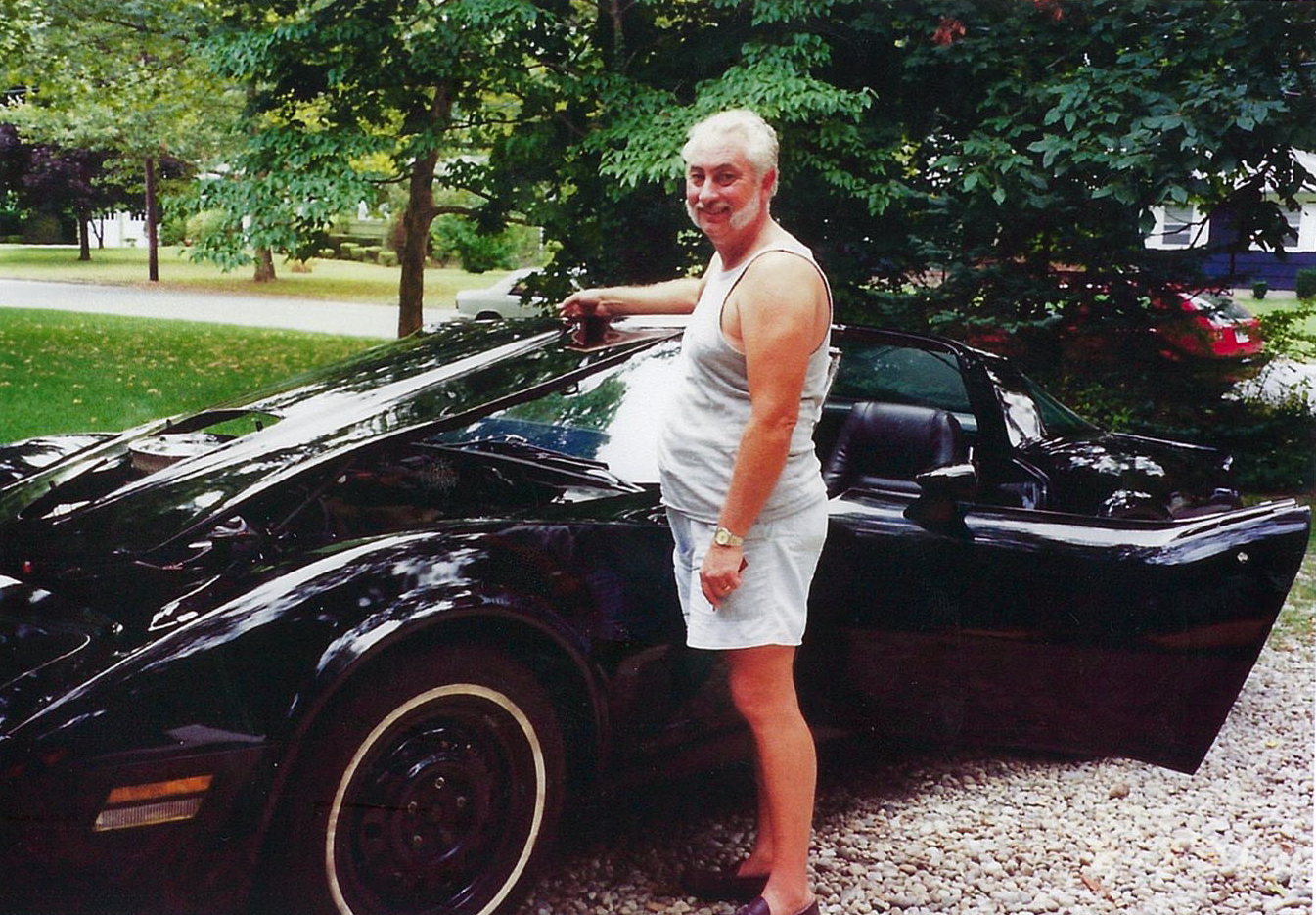 While growing up I came to know there was nothing my dad could not fix.  At some point, I noticed my dad, John Jacobi (sometimes known as JJ) strived to do things differently than most.  For instance, he wouldn’t buy something if he knew he could make it.  Sometimes this was just plain embarrassing to me but as I got older I realized not everyone could engineer the things that he did.  He was an engineer by trade and grew up working in garages on cars.  Our family never took any of our cars to a shop as there was no need.  He would also improve upon something if he knew he could build it another way.  Nothing hits this point across like what he did with his most favorite type of car – the Corvette.

At the time we lived on Long Island where winters brought snow.  My dad wanted a front wheel drive vehicle for all weather handling.  Also, after repairing numerous rusty cars, he wanted a fiberglass body, of course he wanted a Corvette fiberglass body.  He liked the handling of an Eldorado chassis hence the name – El Vette.  Initially, according to his notes, he sought guidance from a chassis specialist.  He called him the frame man.  The frame man gave him the go ahead for the project even though the chassis had to be shortened by sixteen inches to match the Corvette’s wheel base and allow for effective handling.  Essentially, he was going to alter an Eldorado frame to support a Corvette body.

He purchased a 1979 Corvette body at a junk yard, which down the road made for a night I will never forget. (I will explain shortly.)  He also obtained a 1979 Eldorado chassis with four-wheel disc brakes and fully independent suspension.   The frame specialist (or frame man) shorted and aligned the frame, with additional structural alterations to allow the Corvette body to sit as close as possible to the standing height of a stock Corvette.   An inch and a half difference in standing height was accomplished by lowering a foot and a half section of the frame in front of the rear wheels from a stock four inch in height section to a two inch in height section.  This had to be done without disturbing the supports for the independent rear suspension.  A free formed 3/16-inch steel plate was used to retain the original structural strength of the altered section of the chassis.

The body was aligned to the chassis using the wheel openings and factory mounting dimensions.  With the body suspended over the chassis, which was tied down to stock suspension standing height, steel brackets were fabricated to utilize stock Corvette body rubber mounting cushions.  The rear section of the body is supported by utilizing a section of a Corvette frame spliced to the Eldorado frame with the 3/16 of an inch steel plate.  Utilizing this section of the rear Corvette frame retained the original mounting of the gas tank, spare tire and bumper.

To support the front fenders, a frame extension assembly was fabricated of similar design as a Corvette’s using two-inch steel pipe bolted to the Eldorado frame.   To compensate for difference in the Corvette and Eldorado body weights, the rear coil springs were shortened and the front torsion bar suspension adjusting blocks were relocated.  The Eldorado steering gear box was rotated for better alignment.  Wheel alignment was checked professionally and found within factory standards.   The chassis alterations were professionally welded.  The chassis was sandblasted and painted.  The body was bolted on using stock mounting bolts and cushions.

An Oldsmobile 350 engine with 19,000 miles with an Eldorado transmission was installed.  Given that the engine sits sixteen inches further forward in the Corvette body the stock wiring harness was extended.  To retain the Corvette stock pop up headlights a custom radiator needed to be designed and fabricated.  The radiator is cooled by twin electric fans.  From his notes, it looks like Dad had a local shop do this as well as extending the air conditioning lines to the compressor.  Also, the air compressor and alternator had to be relocated on the engine in order to clear the Corvette hood.  With the engine sitting further forward, an opening in the hood was needed to clear the carburetor.  The opening is covered with a removable smoked plexiglass cover styled to the Corvette hood lines.  This is the only outward appearance that would tell someone that the vehicle is not a stock Corvette.  He added chrome dress up items.  Finally, he painted the body black.  After his first test drive he reported that the car handled well.

My dad had started this project in October of 1985, shortly before I was in high school.  I will always remember him in the garage in his spare hours working away on what he found to be fun, but he also made time for going sailing with his family and playing golf.  It was one night in the fall of 1990 when I started college that I will never forget.  My dad had received some bad news from the Department of Motor Vehicles when he went to title his custom-made vehicle.  It turned out the VIN did not match correctly on the body.  The DMV told him they would be conducting an investigation into the matter before giving any approval for title.  My dad had bought the body from a junk yard with a complete bill of sale.  However, this put all his hard work over the last five years in jeopardy.   He was beside himself and deeply worried.  My mom was no help either. She had him convinced that he might go to jail for purchasing a stolen Corvette body and how devastating that would be for our family.

It was a stressful time, but one Friday night my parents decided to go to a local playhouse to see a play.  I was coming home from the video store where I occasionally picked up a movie.  I got out of my car when another car pulled into our driveway closely behind my car.  A guy jumped out and flashed some sort of badge.  It scared me half to death.  I didn’t know if he was going to hurt me or what as he was not dressed in a police uniform.  I made it to the front door when he pulled out what he called a warrant for searching the premises for the Corvette.  My heart stopped.  It was my dad’s baby.  They wanted to take my dad’s car and they were asking me for the keys to drive it away.  What was I going to do? I couldn’t let them take the Corvette!  I told him I needed a minute and went inside.  There I was reading the warrant and wondering if I should give them the keys before my dad got home.  I went back out and told him I was looking for the keys to stall for some more time.  At this time, several police cars pulled up to the house and the began to blockade the street where we lived on either end, which seemed to be ridiculous.  Did they think I was going to pull some sort of Dukes of Hazzard move and try and make a break for it?  This, of course, was happening before we had cell phones, so I couldn’t call my parents. But I remember calling the theater to see if I could get my dad on the line.  The performance was in full swing and the person I reached was not about to disturb the show, but she would attempt to give a message to my parents during intermission to call home.  This wasn’t promising. I wondered what might happen if there was a medical emergency.  I couldn’t get my head around what was happening, how might I stop it or at least buy some time. I hadn’t yet gotten my law degree, which would have told me the investigator didn’t have the right to go into the house or garage, he only had the right to look around the house or be in the driveway.  Either way, being the law-abiding citizen that I am, I opened the garage and eventually gave him the keys while dreading my dad coming home to see an empty garage.

My dad didn’t say much that night.  Later, he only expressed how he dreaded the fact that I had to deal with an investigator and several police officers on a Friday night while I was home alone.   He thought they could have come during the day, called first to arrange to talk to him and pick up the car.  He was upset how they scared me and that he contributed to that night.  I was upset that I might have let him down by handing over the keys.  Motor vehicles had decided to repossess the car because they said they thought the Corvette body might have been stolen.  My dad was never charged with any crimes as my Mom threated.  He got a lawyer for advice.  I couldn’t understand how they could take the whole car when the rest of it he also purchased, improved upon and built a fully functioning vehicle.  Yet, this wasn’t acknowledged.  That said the car went up for auction and yes, my Dad had to bid and pay for his own car all over again, it was a crazy ordeal but he wasn’t going to let it go.  In 1993, motor vehicles gave him title for a custom car, a 1979 Corvette with a 1979 Eldorado chassis.

I guess every special car has a good story behind it.  This one may have a few.  To me it embodies who my dad was because he wasn’t stock parts.  He wasn’t afraid to be different and to challenge himself.  He was also a man of great integrity and humility.  He never bragged.  In his notes, he credits all his friends and the professionals hired for putting his dream project together for him.

This past April my Dad died suddenly.  He always told me he wanted the Corvette donated to the National Corvette Museum if they would have it, unless of course I wanted to keep it.  My dad would be over the moon to see his car go to the museum.  This is actually my only regret that he did not get to donate the car himself.  The day I left his house to go to the funeral parlor for his funeral I was passed by a new Corvette.  It was probably the only time that day that I had a smile on my face and laughed out loud trying to fight back the tears.  Later in the year, at the insistence of a long-time friend of my dad’s, I took the car for a short, quick ride and said my goodbyes.  I don’t have the knowledge to care for the car as he did and I want to honor his wish.  Yet, I also hope that those who may come in contact with the car at the museum may come to know my dad in a way by seeing what he engineered, loved to talk about and share with others.  How he was the furthest thing from stock parts. 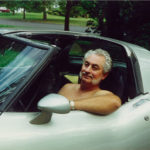 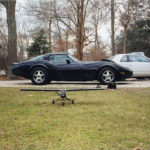