For the White family, Chevy runs deep – about 40 years deep when it comes to Corvettes. Bob was 16 years old when his uncle bought a 1973 Canary Yellow Corvette and he vividly remembers borrowing the car for a first date… because that date is now his wife of 38 years. “That started it,” Bob said. “From there, my wife’s father bought a 1978 Corvette. That was his dream since he was a kid. Then my brother and I have each bought several Vettes since then.”

The second generation of Corvette ownership began with Bob’s brother, Dave’s purchase of a 2000 Navy coupe that was picked up through the Museum’s R8C Delivery program in August 1999. This was quickly followed by Bob’s first Corvette purchase, a 1998 Black Coupe. Adding to this stable of Vettes, the C5 was joined by a 1965 Red Coupe for his 30th wedding anniversary, then a 2006 Z06 (also picked up at the Museum through the R8C Delivery program) which he sold for a 2010 ZR1 and today, it’s a 2015 Z06 with the Z07 package sitting in his garage – a car he watched being built through the Museum’s Buyers’ Tour Program December 2015. “I’ve been to the Museum many, many times. Our tour host was phenomenal, gave me a behind the scenes tour of the Museum. The Blue Devil had just been delivered [post sinkhole repair].”

The love of Corvettes has been passed down to the third generation when Bob’s sons became owners as well. His son, Ryan (32), now owns the 1978 Corvette. “My father-in-law is now 85 and he was going to sell it. We were like, ‘no way.’ It only had 45,000 miles and is in pristine condition. We gifted it to Ryan and he just loves it.”

After upgrading their C5s with new C6s in 2005, the White brothers were off to Spring Mountain. “My brother and I went, literally, as it was opening up. We gave each other the three-day experience as birthday gifts. That was about ten years ago. They didn’t even have the buildings yet and we watched them put up the first front gate. We’ve gone literally every other year since. That turned my younger son to track.”

If you ask Bob why he keeps going back for more, he doesn’t even hesitate with his answer. “It’s just amazing to see the progress that we make. Every time I go it’s better and better. The organization, the team, just the whole crew is professional. They still have a lot of the same people in place. They put together an outstanding program. The amenities, the condominiums. The drivers are focused on making sure you understand what good quality track time is. I keep coming back. Frankly, I think every kid should go through the defensive driving program. And since Ron’s [Fellows] been involved, getting to spend time with him is great. We’ll be joining him at Mosport next year.”

Bob’s appreciation and enjoyment of high performance driving goes beyond his experience behind the wheel. He and brother, David, are Corvette Racing enthusiasts, following the team to many races since the days of the C5-R. “I live in San Diego and my brother lives in Valencia. I would take my son and he would take his daughter and we would go up to Laguna Seca, as well as Sonoma. It was a great time to spend with the kids. We saw the C7.R take laps under camouflage at Laguna Seca. We spend a lot of time traveling around the country, following the race team… Road Atlanta, Long Beach, Sebring, the Detroit Auto Show for the reveal of the C7.R race car and the C7 Z06. That was phenomenal.”

“We are truly, truly a big Corvette family through thick and thin,” Bob added. 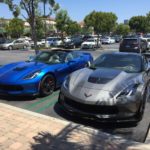 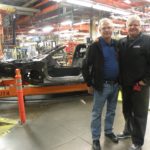 Dave White (left) and Bob on a Buyers’ Tour at the Corvette Plant. 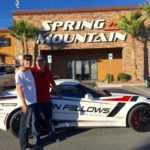 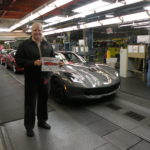 Bob White on a Buyers’ Tour 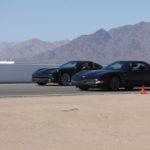