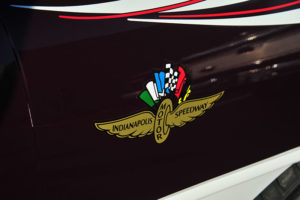 Chevrolet Corvettes have paced the Indianapolis 500 thirteen times, from 1978 all the way up to 2015, and in 1995 it was a dark purple and white convertible Corvette, driven by Chevrolet General Manager Jim Perkins, that took that first lap around the Indianapolis Motor Speedway. Chevrolet announced that it would be making 522 Pace Cars: 87 of them designated for the Indianapolis 500 Festival and public relations use, 20 to export to Canada, and one each to the top 415 dealerships. The actual final production count for this special edition was 527.

Tony Cairns bought his 1995 Corvette Pace Car at an auction in Florida and wanting to preserve its low mileage, he stored it and never drove it. After speaking with Connie Russell in the Development Department at the Museum a few years ago, Tony learned that the Museum did not own a 1995 Corvette Pace Car.  “I decided that if I couldn’t drive it – it wasn’t doing anyone any good just sitting there,” Tony said.

The summer of 2015 Tony made the decision to move forward with donating the car.  “There are other 1995 Pace Cars you’ll see driving around, but what makes this one worth the money is the low miles.” Tony’s car has a mere 340 miles on the odometer.

A member of the Museum and owner of three Corvettes (a 1962, 1978 Pace Car and 2015 Z06), Tony has never visited but has kept in touch, following the sinkhole media coverage and reading up on the Museum in America’s Sports Car magazine. He plans to swing by next May, where his car will be waiting to see him in the Skydome.

Thank you, Tony, for your generosity and for helping to preserve the history of Corvette!