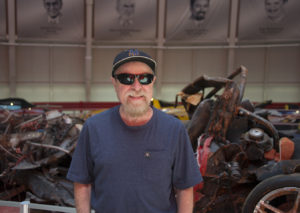 When walking through the National Corvette Museum, you never know who you’ll run into. Recently Eric Bloom, front man for the rock band Blue Oyster Cult, stopped by just hours before a performance. Having sold 24 million albums, they continue to tour, thrilling audiences with songs like Burnin’ for You, Cities on Flame, Godzilla, and Don’t Fear the Reaper.

“I’ve been a car guy since I was looking out of the window of my father’s 56 Buick Roadmaster,” Eric said. “so I couldn’t resist coming here. I’ve passed by it many times, but this is the first chance I’ve had to stop in.”

Eric collected hot rod magazines throughout his life to read about the latest cars, picking up a lot of automotive history along the way. He proved that as he walked through the Museum, allowing the exhibits to spark memories and facts he recalled about the cars he saw. “I’ve visited automotive Museum’s all over the world and I have to say that this one is really impressive,” he commented. “If you have a motorcycle, you’ve got to go to Sturgis. If you’ve got a Corvette, you have to come here.” 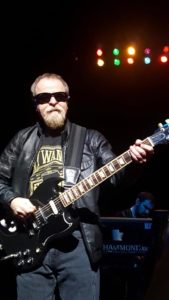 Although Eric has always liked Corvettes, having been on the road with Blue Oyster Cult since 1972, he never really had the time to enjoy one. Today his current favorite ride is a Cadillac XLR, which he has collector car insurance on through the NCM Insurance Agency. “I like it a lot. It is comfortable, beautiful and fast, with a lot of Corvette DNA in it. It was built here in Bowling Green at the Corvette Plant too. Still, looking at all of these Corvettes on display is making me think I should get one now.”

As he walked past the damaged cars on display as part of our Sinkhole exhibit, one fan asked Eric if he’d pose for some pictures in front of them.

“It’s a fitting background,” he said. “It looks like Godzilla just came through here.”