Make plans to return to the National Corvette Museum to see these future temporary exhibits. 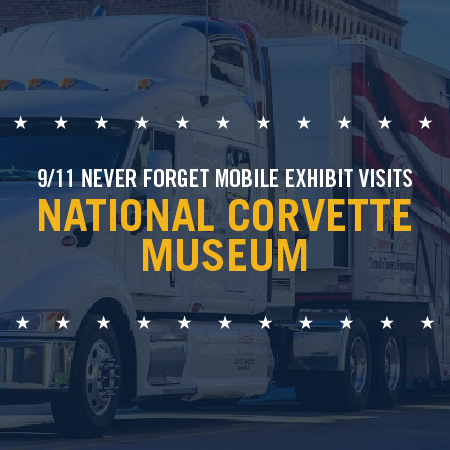 The Siller Family started the Tunnel to Towers Foundation to honor the memory and carry on the legacy of their brother, Stephen, a New York City ­firefighter (FDNY) who lost his life on September 11, 2001 after strapping 60 lbs. of gear to his back and rushing on foot through the Brooklyn Battery Tunnel to the Twin Towers, where he gave up his life while saving others.

In 2013, the Tunnel to Towers Foundation launched its 9/11 NEVER FORGET Mobile Exhibit; a tribute to all those who lost their lives on September 11, 2001, including, of course, the 343 members of the FDNY who made the ultimate sacrifice. The high-tech, 53-foot tractor-trailer, which transforms into a 1,000 square foot exhibit, is a tool to further educate citizens throughout the country about the events of that tragic day.

Speed, power, performance…Buckle up and race with the most famous toy vehicles on the planet—Hot Wheels! Be part of a dynamic race team working together to build and test the world’s fastest (and safest) speed machines, using Hot Wheels® diecast cars to experiment and play. This behind-the-scenes look at the thrilling world of racing investigates the scientific process for designing super-fast cars. Hands-on experiences, authentic race gear, and captivating memorabilia will engage families in the process.