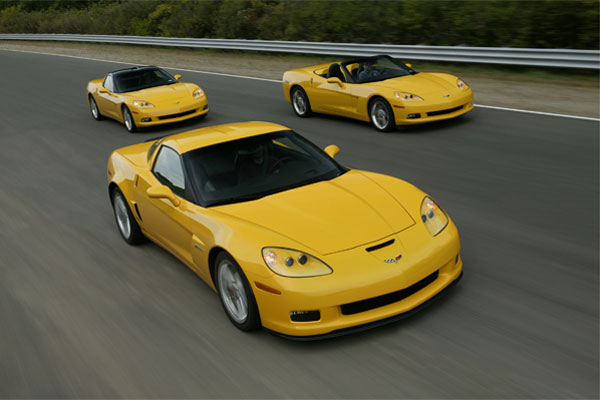 DETROIT – By winning every race in the 2004 season, the Corvette C5-R racing team wrapped up the most successful era in Corvette’s 50-year racing history. In its five years, the C5-R racing program took 35 victories in 55 races, four American Le Mans Series championships and three double victories at the 24 Hours of Le Mans.

The Z06 sparked the second half of the C5’s life span with a Corvette model for the extreme performance enthusiast. Now, Team Corvette combines the numerous attributes of the sixth-generation Corvette with the technology and winning determination from the C5-R program to take the new Z06 to the next level in total performance.

Chevrolet introduced the 2006 Corvette Z06 at the North American International Auto Show. It is the fastest, most powerful car ever offered by Chevrolet and General Motors. It is comprised of an unprecedented level of capability and technology, making it one of the greatest performance values on the market. And with an unmistakably muscular appearance, the ’06 Z06 has a visual attitude that always looks ready to demonstrate Corvette’s winning attitude to any challenger around the globe.

“The new Z06 is the dividend from competing so successfully in endurance racing,” said Dave Hill, Corvette’s chief engineer. “It combines the strong attributes of the new, sixth-generation Corvette with the spirit, technology and know-how from the race program to form an American supercar with outstanding credentials.”
The new Z06 achieves 505 horsepower in an approximately 3130-pound (1419.7 kg) package and is expected to deliver 0-60 performance of less than 4 seconds, eclipse the quarter-mile in less than 12 seconds and deliver a top speed of more than 190 mph on a race track.

The links between racing and the production Z06 are both direct and indirect, as the vehicle was developed in conjunction with the forthcoming C6-R racecar, but they boil down to the application of lessons that could only have been learned after countless laps of endurance racing – everything from suspension geometry to aerodynamics. What the engineers developed was a totally unique vehicle that has its own powertrain, body structure and chassis system which are distinct from other Corvette models.

Previous Z06 models, from the original 1963 model to the 2001-04 editions, incorporated suspension and/or engine upgrades that complemented existing Corvette systems. Not surprisingly, the specs for the ’06 read like the blueprint of a champion. They include:

The features above are merely the highline points of the comprehensively designed Z06. What follows is a closer look at the vehicle’s unique attributes.

The all-new LS7 of the ’06 Z06 reintroduces the 427-cubic-inch engine to the Corvette lineup. Unlike the previous 427 engine, which was a big-block design, the new 7.0-liter LS7 is a small-block V-8 – the largest-displacement small-block ever produced by GM and a tribute to its 50 years as a performance icon.

With 505 horsepower and 475 lb.-ft. of torque, it also is the most powerful passenger car engine ever produced by Chevrolet and GM. The LS7 is easily identified under the hood by red engine covers with black lettering.

The LS7 shares the same basic Gen IV V-8 architecture as the Corvette’s 6.0-liter LS2, but the LS7 uses a different cylinder block casting with pressed-in steel cylinder liners to accommodate the engine’s wide, 104.8-mm-wide cylinder bores; the LS2 has 101.6-mm bores. And when compared to the LS2, the LS7 also has a different front cover, oil pan, exhaust manifolds and cylinder heads.

The LS7’s specifications include:

“In many ways, the LS7 is a racing engine in a street car,” said Dave Muscaro, Assistant Chief Engineer of small-block V-8 for passenger cars. “We’ve taken much of what we’ve learned over the years from the 7.0-liter C5-R racing program and instilled it here. There really has been nothing else like it offered in a GM production vehicle.”

One of the clearest examples of the LS7’s race-bred technology is its use of titanium connecting rods. They weigh just 480 grams apiece, almost 30 percent less than the rods in the LS2 V-8. Besides being lightweight, which enhances high-rpm performance and rpm range, titanium makes the rods extremely durable.

The LS7’s CNC-ported aluminum cylinder heads are all-new and designed to meet the high airflow demands of the engine’s 7.0-liter displacement, as it ingests approximately 100 cubic feet more air per minute than the Corvette’s 6.0-liter LS2 V-8 – an 18-percent increase in airflow. Consequently, a hydraulic roller camshaft with .591/.591-inch valve lift is used to allow plenty of air to circulate in and out of the engine.

To ensure optimal, uninterrupted airflow, the LS7’s heads have straight, tunnel-like intake runners. Very large by production-vehicle standards – even racing standards – they are designed to maintain fast airflow velocity, providing excellent torque at low rpm and exhilarating horsepower at high rpm. The heads feature 70-cc combustion chambers which are fed by huge, 56-mm-diameter titanium intake valves. The lightweight titanium valves weigh 21 grams less than the stainless steel valves used in the LS2, despite the valve head having 22 percent more area. They are complemented by 41-mm sodium-filled exhaust valves, vs. 39.4-mm valves in the LS2. To accommodate the large valve face diameters, the heads’ valve seats are siamesed; and, taken from experience with the engines of C5-R racecars, the LS7’s valve angles are held at 12 degrees – versus 15 degrees for the LS2 – to enhance airflow through the ports.

All LS7 engines are assembled by hand at GM Powertrain’s new Performance Build Center in Wixom , Mich. The exacting standards to which they are built include deck-plate honing of the cylinders – a procedure normally associated with the building of racing engines and almost unheard of in a production-vehicle engine.

The LS7 has a dry-sump oiling system designed to keep the engine fully lubricated during the high cornering loads the Corvette Z06 is capable of producing. An engine compartment-mounted 8-quart reservoir delivers oil at a constant pressure to a conventional-style oil pump pick-up at the bottom of the engine. The pressurized oil feed keeps the oil pick-up continually immersed in oil at cornering loads exceeding 1 g.

Oil circulates through the engine and down to the oil pan, where it is sent back to the reservoir via a scavenge pump. The large-capacity reservoir, combined with a high efficiency air-to-oil cooler, provides necessary engine oil cooling under the demands of the engine’s power output. With the dry-sump system, oil is added to the engine via the reservoir tank – which includes the oil level dipstick.

The LS7’s dry-sump system was developed and tested on racetracks in the United States and Europe , including Germany ’s famed Nürburgring. And while common in racing cars, the Corvette Z06 is one of just a handful of production vehicles – and the only production Corvette – to ever incorporate such a high-performance oiling system.

The Corvette Z06’s powertrain and drivetrain systems are matched to the LS7’s performance capability. The light, four-into-one headers discharge in to new, close-coupled catalytic converters and through to new “bi-modal” mufflers. The mufflers each feature a vacuum-actuated outlet valve, which controls exhaust noise during low-load operation but opens for maximum power.

At the rear of the LS7 engine, a single-mass flywheel and lightweight, high-capacity clutch channel torque to the rear transaxle. The six-speed manual transmission has been strengthened to handle the LS7’s increased torque load. The transmission includes a pump which sends transmission fluid to the front radiator for cooling. Upon its return, the fluid removes additional heat from the differential lube before returning to the transmission.

The Z06 has a unique aluminum body structure for optimum stiffness and light weight for the fixed-roof body style. Perimeter rails are one-piece hydroformed members featuring cast suspension nodes, which replace many welded steel components on other Corvette models. Other castings, stampings and extrusions are combined into the innovative structure with state-of-the-art manufacturing technologies.

The 2006 Corvette Z06 has a new magnesium cradle that serves as the attachment point for the engine and some front suspension components. Magnesium is lighter than aluminum yet incredibly strong. The magnesium cradle helps improve the front-to-rear weight distribution, as do carbon-fiber front fenders and wheelhouses. Engineers also moved the battery from underhood to a position in the rear cargo area, behind one of the rear wheels.

“This is an instance where the street car uses more advanced material than the racecar,” said Hill. “We’re constrained by rules to run the steel frame in the racecars, but we stretched to bring even more performance technology to the street for our customers.”

The Z06 retains the 106-inch (2686-mm) wheelbase of other Corvette models, as well as the short-long arm suspension and transverse leaf spring design, but it rides on all-new wheels, tires, brakes, as well as its own rear spring and roll stabilizer.

The firmer suspension works harmoniously with large 18 x 9.5-inch cast-spun aluminum wheels and 275/35ZR18 tires in the front, and 19 x 12-inch cast-spun aluminum wheels with 325/30ZR19 tires in the rear – the largest wheel-and-tire combination ever offered on a Corvette. The tires use the latest extended-mobility technology from Goodyear to provide a satisfactory ride, but still allow the vehicle to achieve lateral acceleration of more than 1 g. The extended-mobility tires eliminate the need – and weight – for a spare tire and jack or inflator kit, and reduce the chance of a sudden loss of handling capability.

“The Z06 enables the driver to turn excellent track lap times, but it also is quick to learn and is very forgiving for its performance level,” said Hill. “We tested its capability around the world to ensure it will feel at home on any road or race track.”

The large brakes bring an excellent level of stopping capability with the Z06, and with their four-wheel brake cooling, they provide excellent fade resistance and lining life during track duties.

The new Z06 has an unmistakable and aggressive appearance, with design cues that include:

While the function of the Z06’s design is to move air efficiently over the body and reduce lift, the net effect is a car that looks like a weight lifter whose muscles are straining the seams of his shirt.

“The Z06 has been sculpted very carefully, with every element in its design serving a performance function,” said Hill. “It also has a purposeful, menacing resemblance to the C6-R.”

The aerodynamics of the Z06’s exterior were shaped by the experiences of the Corvette racing program, where high-speed stability and cornering capability are paramount. And while the racecars use large rear wings, the Z06’s elevated spoiler provides sufficient downforce to balance the road-worthy front splitter without adversely affecting aerodynamic drag. The Z06’s Cd is .31.

For all its race-inspired functionality, the Z06 is designed to be a daily drivable high-performance vehicle. To that end, comfort and convenience are held to a very high standard. HID lighting, fog lamps, leather seating, dual-zone air conditioning, cabin air filtration and Head-Up Display (HUD) with track mode and g-meter are standard.

The Z06 also has a revised gauge cluster that displays the Z06 logo on the 7000-redline tachometer and has a new readout on the oil pressure gauge to reflect the higher standard pressure of the dry-sump oiling system. And, like other 2006 Corvettes, the Z06 has a new, smaller-diameter three-spoke steering wheel that provides a more agile, performance-oriented feel. The seats feature two-tone leather surfaces, with Z06-logo embroidery and contrasting stitching.

But for all its comfort, engineers did sacrifice a few components in the quest for lower weight and higher performance:

Production of the 2006 Corvette Z06 will begin in the second half of 2005 at the Bowling Green, Ky., Assembly Plant.