In 1997 the C5 Corvette was released. Superb braking, handling, ride, comfort, and roominess, the Corvette C5 had it all. The 1997 was the most changed Corvette since 1953. The C5 is faster (345 hp), lighter (68 lbs less than the 1996 model), stiffer (4.5 times stiffer) and quieter than the previous Corvette models. Lots of changes were introduced, virtually everything was new, from the aluminum LS1 V8 engine to the rear-mounted transmission. Technical delights ranged from an independent suspension that “thinks” and Extended Mobility tires that can “run flat” to a unique frame design that was the stiffest ever. The new body shape underwent wind tunnel testing, until it was down to 0.29 coefficient of drag. This allows for improved performance, mileage and top speed. The front to rear weight ratio was nearly perfect at 51.4/48.61, due to the transmission being in the rear, the first Corvette with this feature.

Even the wind will have a hard time catching it. The Corvette’s aggressive race car appearance goes beyond passion. The C5 was described in the 1997 sales brochure as “slippery”. In wind tunnel testing, Corvette achieved a .29 CD- the best in the world among high end sports cars at the time. That impressive number contributed to two other impressive numbers: a top speed on the GM test track of 175 mph, and excellent real-world fuel economy (preliminary EPA estimated MPG is 18 city/28 highway). From lowered hood to sculpted tail, the C5 is a beauty that works.

Living up to the Chevrolet “small block” legacy was considered an enormous responsibility. The guiding philosophy of the Corvette V8, simplicity, lightness of weight, and sheer elegance of design, endures in the newest small block V8, the LS1. In designing this new engine, the Corvette team benchmarked every competitor.

alancing horsepower, torque, fuel economy, smoothness, and durability in the engine was vital. LS1 configuration is familiar: pushrod V8. Great power-to-engine weight ratio and massive low-end torque, all combined with high-revving character that was once the exclusive domain of overhead cam engines. LS1 specifications include an all aluminum block designed for stiffness, strength and low mass, a unique camshaft design that improves engine breathing and a 10:1:1 compression ratio which helps maximize engine power. New with this model was a lightweight composite intake manifold that improved airflow and a highly sophisticated level of Sequential Fuel Injection technology. In the best Corvette tradition, LS1 numbers speak for themselves. Displacement: 5.7 Liters, Horsepower: 345 at 5600 rpm. Torque: 350 lb.-ft at 4400 rpm. There had never been a more powerful production small block V8 in Corvette history. The LS1 may be teamed with either an electronically controlled 4-speed automatic transmission or a six-speed manual.

Beautiful, Down To Its Aluminum Alloy, Torque-Tubed Soul
From the Metal Matrix composites to hydro-formed steel, everything you see here advances the art of sports car design. And, all of which makes the 1997 Corvette an appropriate successor to the Corvettes which have come before. The compact size of the LS1 V8 engine helped Corvette designers achieve a lower hoodline for both excellent visibility and a tighter turning circle. The transmission is at the rear for three reasons. First to enhance the chassis/body rigidity with a longitudinal structural center tunnel, second to provide optimum weight distribution, and last to provide a larger interior with more foot-room and legroom. The unique Corvette structure (consisting of a strong perimeter frame combined with a center backbone) provides a level of structural rigidity that’s world class. In the 1997 Corvette drivers can enjoy steering that responds precisely to driver input with a sensational blend of ride and response. Noise and vibration controls which are excellent to reflect an overall level of refinement in the vehicle. The 1997 Corvette set a new standard for high-performance automobiles.

A Metal Matrix Composite (MMC) makes up the driveshaft. It combines aluminum, aluminum oxide, and ceramic for a combination of great strength. The shaft has a relatively small diameter (to fit inside the torque tube) and the low weight that the aluminum provides. The ’97 Corvette structure was four times stiffer than the 1996 model. The new, robust design, which featured a high strength perimeter frame and unique center backbone, allows for the independent suspension to be tuned strictly for wheel control from road inputs- the suspension does not have to compensate for flexing of the structure. Molded into shape by a high-pressure hydroform press, tubular steel makes up the perimeter frame. These one-piece frame rails are stiffer, stronger, and lower than the previous designs. These improvements enhance structural rigidity, help to deliver a better ride, and also provide a lower step-in height.

The engine in a Corvette has platinum-tip spark plugs. This means that tune-ups do not have to happen as soon, for up to 100,000 miles according to the sales brochure. Extended-life engine coolant does not need to be changed for five years or 150,000 miles, whichever comes first. The recommended oil change interval is 10,000 miles and there are no transmission fluid changes, ever, under normal conditions.

New Technology New Level of Exhilaration
Being behind the wheel of America’s Sports Car has always been a pulse quickening experience. With the 1997 Corvette, the experience soars to a new high. The all-new, fully independent suspension uses an advanced SLA (Short/ Long Arm) design for all four wheels. Also known as “double wishbone” or “double A arm,” this was the preferred design for high-performance sports and racing cars. There are three distinct suspension choices for 1997. FE1 is designed to please the majority of Corvette drivers with an outstanding blend of ride and response and its standard equipment. For enthusiasts seeking the ultimate in Corvette technology, the optional F45 with Real Time Damping is the suspension that “thinks.” F45 features computer controlled shock absorbers that automatically increase shock absorber rates in “real time”- 10 to 15 milliseconds- as road conditions dictate. The system automatically counteracts roll in turns, as well as lift and dive. With F45, there are three manual settings- Touring, Sport, and Performance- each with its own distinct range of ride firmness.

Then there’s Z51, a suspension option for die-hard performance fans, and its the racing package that you would want if you intend to participate in sanctioned competitive events. Z51 components include stiffer springs, larger stabilizer bars and larger monotube shocks.

Tires
It is no coincidence that a stunning new ultra-performance tire makes its debut on the 1997 Corvette. Corvette engineers worked closely with Goodyear to create the Eagle F1 GS, an all-new generation of tire designed specifically for this application. The F1 is an Extended Mobility tire. In other words, you can drive up to 200 miles at 55 mph on completely deflated tires, so no spare is necessary. A premium four wheel anti lock brake system is standard. This Bosch ABSS minimizes wheel lock-up while braking and is designed to help you maintain steering control and prevent skidding on most slippery surfaces. The brake rotors are larger and braking performance is more powerful than ever before. New, premium non-metallic linings provide smooth, quiet braking. Lightweight aluminum wheels (17″ front/ 18″ rear) reduce unsprung weight and add to the Corvette’s bold appearance. A four wheel geometric alignment machine custom sets each 1997 Corvette to its optimum ride height. All caster, camber and toe alignments are completed to exact standards. The benefit to Corvette drivers is the glass-smooth precise feel of a well-built sports car. The Eagle F1 GS tires are P245/45ZR17 in front and P275/40ZR18 in the rear. The Goodyear tires feature a patented Aquatread design for great all-season performance and are speed-rated to 179 mph at 30 psi. 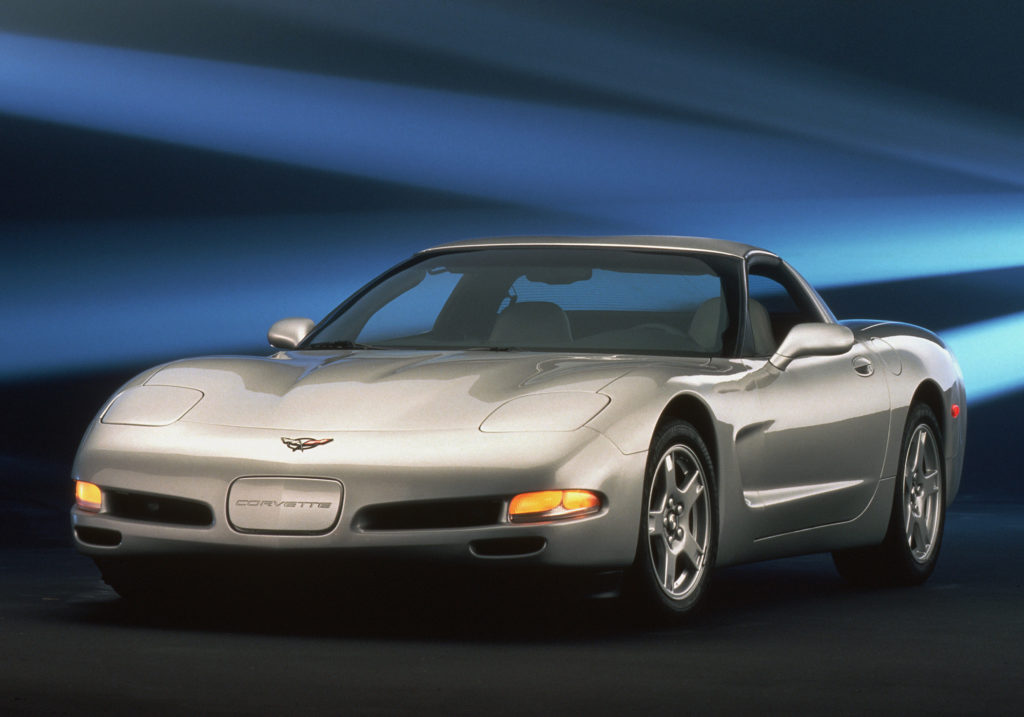