With 40 years of heritage and refinement behind it, the 1993 Corvette was the classic American two-seater. Corvette’s 5.7 Liter LT1 V8: this 300 HP V8 combines smooth in-city performance and ferocious capability at high RPM, with either the 4-speed automatic or the 6-speed manual, this is driving the way it is meant to be. Technology in the 1993 Corvette also includes sophisticated fully independent suspension with precision-crafted aluminum componentry, an all-disc-four-wheel anti-lock brake system, and a traction-control system that helps Corvette utilize all available traction by regulating wheel spin. And asymmetrical, unidirectional 17″ Goodyear Eagle GS-C tires help deliver precise response to driver input.

The 1993 sales brochure referred to the LT1 as “America’s Most Respected V8”. The LT1 was the most powerful small block V8 ever placed in a production Corvette. The LT1 updated Chevrolet’s small block V8, first introduced in 1955. It had powered more cars, both on the street and on the track than any other V8, and the LT1 was the update for a new generation of performance lovers.

Four-Wheel Independent Suspension
The balanced feel of Corvette is due to a sophisticated fully independent suspension. The technology includes monoleaf front and rear transverse springs, high strength but lightweight forged aluminum components and a unique five-link rear suspension that does an excellent job of keeping the rear tires “planted” even while cornering on irregular road surfaces. High-performance Goodyear Eagle GS-C asymmetrical and unidirectional tires are an integral part of the chassis dynamics.

Optional Selective Ride and Handling Package
This computerized ride control system allows the driver to select from one of the three shock absorber damping levels (Touring, Sport, or Performance) via a console mounted switch. It is programmed for six automatic gradations of firmness within each mode, with firmness increasing as vehicle speed increases.

Bosch ABS IIU
This Bosch ABS is one of the most advanced four-wheel anti-lock braking systems available in any automobile, and it is standard in every 1993 Corvette. ABS reduces the chance of wheel lockup during braking and is designed to help you maintain steering control even in a panic stop in rain, or snow or on ice. When called upon to do so, ABS can adjust brake pressure as rapidly as 15 times per second, a pace even the most skilled professional driver cannot attain. Bosch ABS IIU is contained with four-wheel power discs for up to 1.0g of stopping power

Ever since it stormed onto the sports car stage in 1990, Corvette ZR-1 has been front and center, the ZR-1 made history. It put Corvette in league with the fastest Ferraris, Porsches, and Lamborghinis, and while doing so the US-born ZR1 maintained Corvette’s comfort and civility level. The ZR1 made more history in 1993, the LT5 V8, which is exclusive to ZR-1, jumps 30 horsepower to 405 at 5800 RPM, Torque is 385 lb-ft at 5200 RPM.

Four Cams, 32 Valves
Specifications of the 32-valve LT5 V8 are legendary; all-aluminum construction, four overhead camshafts, Multi-Port Fuel Injection with a 16-runner inlet manifold and two Multec injectors per cylinder. There is no distributor; ignition is via a four-coil “direct-fire” system. The result is totally uncompromised high performance. But the intriguing aspect of the LT5 engine is its ability to combine high-RPM power with a smooth, refined around-town attitude.

Speak Softly, But….
A dual-mode induction system contains the secret of LT5 tractability. Within each cylinder, the intake ports, valves and cam lobes are divided into two groups, the primary and secondary. Below half-throttle, or 3000 RPM, the engine breathes through the primary ports only. So operation, in effect, is on three valves per cylinder. But the ZR-1’s full potential is unleashed when you put your foot down. The secondary port throttle valves open to permit fuel-air mixture to enter the secondary intake valves. At this point, the engine is running on all 16 injectors and all 32 valves. The secondary intake valves are actuated by cam lobes with more duration than the primaries, providing true variable valve timing, for both tractable low-speed and impressive high-speed characteristics in a single engine.

Phenomenal as the ZR-1 engine is, it’s not the whole story. The 1993 Corvette ZR-1 is an all-’rounder. Consider content, ZR-1 is not “back to basics”- you get ABS traction control, an airbag…the essential technology in any 1990’s era sports car. Everything on the Corvette option list except for the transparent roof panel is standard in ZR-1. You enjoy a world class stereo with a compact disc player, and a cassette tape player, the luxury of power six-way sport seats with leather seating surfaces, air conditioning and power windows. The LT5 V8 is amplified by a smooth-shifting six-speed manual transmission, a tuned four-wheel independent suspension with Selective Ride Control, and extra-wide Eagle GS-C rear tires designed to put LT5 power to the pavement. Those tires necessitate the uniquely flared read bodywork that has become a ZR-1 signature. It is a not-too-subtle sign that tells the cognoscente you’re driving an exclusive member of the Corvette family. 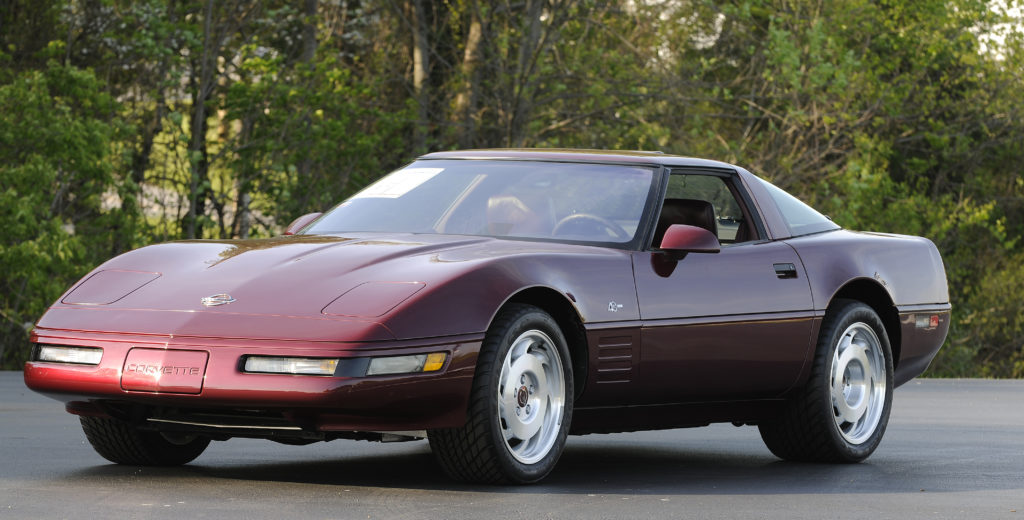