A A+
HomeExploreExhibitsGone But Not Forgotten

Gone But Not Forgotten 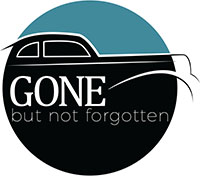 General Motors has played a pivotal role in the global automotive industry for more than 100 years. From the first Buick horseless carriages, to modern technological marvels, the products and innovations have always excelled at putting the world on wheels. A special display of fourteen cars in the Museum’s Exhibit Hall highlights models produced by GM that are no longer rolling off assembly lines.

1940 Cavern Green Cadillac LaSalle on loan from Terry Stephens of Russell Springs, KY
The LaSalle was manufactured from 1927 through 1940. Developed by GM CEO Alfred Sloan, the idea behind the model was to fill pricing gaps in GM’s product portfolio. The LaSalle was the second-most prestigious marque in the GM portfolio, but was priced lower than Cadillac-branded vehicles. The design was conceived by none other than Harley Earl.

1955 Chevrolet (1/2 Ton Series) 3100 Truck (Black) on loan from Kevin Kirby of Bowling Green, KY
The “advance-design” series was billed as a bigger, stronger, and sleeker design. First available in 1947, the trucks were sold with various minor changes over the years until 1955 when it was replaced by the Task Force Series. From 1947 until 1955, Chevrolet Trucks were number one in sales in the United States. The styling for these trucks was the inspiration for both the Chevrolet SSR and the Chevrolet HHR.

1954 Yellow Cadillac Eldorado Convertible on loan from Joe Herrin of Somerset, KY
Manufactured and marketed by Cadillac from 1953 to 2002 (over ten generations) the Eldorado name is derived from the contraction of two Spanish words that translate as “the gilded one” and was chosen in an internal competition for a 1952 concept vehicle celebrating the company’s golden anniversary. The model was designed by Harley Earl and in 2001 GM announced that the Eldorado’s 50th model year (2002) would be its last.

1956 Red/Ivory Chevrolet Bel Air Nomad on loan from Bernie Lawrence of Bowling Green, KY
The Nomad was a station wagon model made off and on from 1955 to 1972 and a Chevrolet Van trim package in the late 1970s and early 1980s. The Nomad’s unique design had its roots in a General Motors Motorama show car of the same name that was based on the Corvette. The concept was introduced at the GM Motorama in 1954 as one of Harley Earl’s dream cars.

1964 Red Pontiac GTO on loan from Jeff Gregory of Somerset, KY
The Pontiac GTO was built from 1964 to 1974 model years and was considered by some to have started the trend with all four domestic automakers offering a variety of competing muscle car models. It was selected as Motor Trend Car of the Year in 1968.

1967 Red Chevelle on loan from Alvin Neal of Somerset, KY
The Chevelle was produced by Chevrolet in three generations for the 1964 through 1978 model years and was one of the brand’s most successful nameplates. Body styles include coupes, sedans, convertibles and station wagons. After a three year absence, the El Camino was reintroduced as part of the new Chevelle lineup. Successors of the model include the Malibu and Camaro.

1967 Buick Wildcat on loan from Kyle Beard of Bowling Green, KY
The Wildcat was produced in two generations from 1962 to 1970, taking its name from a fiberglass-bodied 1953 concept car. In fact, Buick used the name Wildcat for five concept vehicles, three in the early 50s, one in 1985, and another in 1997. All three of the 50s models were designed under the guidance of Harley Earl and two still exist today.

1969 Silver Pontiac Firebird on loan from Brad Adams of Louisville, KY
The Pontiac Firebird was built from the 1967 to 2002 model years and was introduced the same model year as the platform-sharing model, the Chevrolet Camaro. Four generations of the car were produced and originally, the car was a “consolation prize” for Pontiac. The brand had wished to produce a two-seat sports car of its own design, based on the original Banshee concept car, but GM feared such a vehicle would directly compete with the Corvette. Pontiac was instead given a piece of the pony car market by having them share the F-body platform with Chevrolet.

1970 Cutlass Rallye 350 on loan from Gary and April Johnson of Morgantown, KY
In 1970, the horsepower ratings on many popular muscle cars like the Chevelle, the GTO Judge and the Hemi ‘Cuda had hit an all-time high, with insurance premiums to match. This, along with emissions standards and unleaded fuel resulted in the Big Three offering what many called “junior” muscle cars. The Rallye was intended to compete with an existing product group made up of performance appearance packages added to intermediate price leaders. Only 3,547 1970 Rallye 350s, all yellow, were built and they were only offered the one year.

1987 Chevrolet Monte Carlo SS Aerocoupe on loan from Dave Hall of Louisville, KY
Monte Carlos were offered through six generations from the 1970 to 2007 model years (skipping production from 1989 to 1994) and marketed as a personal luxury car, with the last gen considered a full-sized coupe. The first four gens were a rear-wheel-drive, V-8 powered (a V6 from 1978) coupe design. The Aerocoupe first debuted in 1986 with only 200 sold to the public. For 1987, only 6,052 were Aerocoupes out of the 39,251 Super Sports produced.

1987 Black Buick Grand National on loan from Ronnie Moore of Bowling Green, KY
Part of the Buick Regal marque, the Grand Nationals were first produced in 1982 and named for the NASCAR Winston Cup Grand National Series. Buick had won the Manufacturers Cup in 1981 and 1982 and wanted to capitalize on its success (What wins on Sunday sells on Monday). 1987 was the final year of the Grand National with Buick introducing the limited production GNX (Experimental). The stealthy appearance of the all-black GNX and Grand National (and the resemblance of its grill to his helmet’s mouthpiece), coupled with the fact that the Grand National was initially released during the popularity of Star Wars movies, earned it the title “Darth Vader’s Car” and was sometimes referred to as the “Dark Side.”

2002 Collector’s Edition Pontiac Trans Am on loan from Pamela Greenwell of Louisville, KY
The Trans Am was a specialty package for the Firebird, typically upgrading handling, suspension and horsepower as well as minor appearance. In using the name Trans Am, a registered trademark, GM agreed to pay $5 per car sold to the SCCA. Four distinct generations were produced from 1969 to 2002. For the Firebird’s final year, a Collector’s Edition Trans Am was released as either a yellow convertible or t-top coupe, with twin black stripes from hood to tail, black-painted five-spoke 17-inch alloy wheels, and further black-trimmed body details.

2005 Black Cadillac XLR on loan from Pat Heist / Wilderness Trail Distillery of Danville, KY
Assembled in Bowling Green, KY alongside the Chevrolet Corvette, the XLR was produced for model years 2004-2009 and was based on the Chevrolet Corvette C6. It was nominated for the North American Car of the Year award for 2004, and was the second roadster offered by Cadillac in recent years. In 2005, a total of 3,730 XLRs were sold (the highest over the life of the vehicle) with a grand total of only 15,460 XLRs being sold over a nine year period.