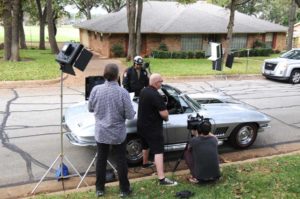 When watching your favorite tv shows, movies or commercials, few vehicles garner a double-take or draw your attention quite like the Corvette. Such is the case for Micheal Brown’s entry in the Doritos Crash the Super Bowl commercial competition. Brown, a Lifetime Museum Member, is a filmmaker from Arlington, TX and a Corvette collector, with 14 models in his personal collection. When he heard that this year would be the 10th and final year for Doritos’ Super Bowl commercial competition, he knew he had to enter.

“Doritos has been extremely successful in this promotion,” Brown said. “While the winner gets prize money of $1 million, most other brands are spending a lot more than that on the production of their Super Bowl spots. I thought if this is the last year, we had to participate.”

Historically, the Doritos commercials have been quirky. “The big deal is the crunch sound,” said Brown. “They provide a tool kit with graphics and recordings of the crunch. We just had to ask ourselves, ‘how can we play off the loudness of the chips?’” Brown’s creative juices started flowing – loud Doritos crunch – loud Corvette.  “I first thought of the tagline ‘Deliciously Noisy’ and then started backing into my idea that way. And there had to be a twist at the end,” Brown shared. “We also wanted to put as much quality into the production as possible.”

Brown used one of his own Corvettes for the shoot, a 1967 Big Block 427.  “We wanted a nice, quiet, tree-lined residential neighborhood to film,” Brown said. “Arlington, TX where we live fits the bill. When I contacted the City Manager to inquire about filming, his question was ‘what can we do to help?’ The city really wants to promote Arlington as being filmmaker-friendly. We used a four-block stretch, city works blocked it off for us. It really worked out well to create an authentic backdrop.” 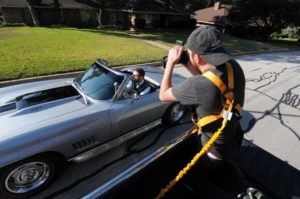 The competition is open to anyone, and videos can be submitted on crashthesuperbowl.doritos.com. “We shot this on Tuesday [November 3] for about 5-6 hours, it took two days to put together, uploaded it on Thursday and it took about 24 hours to go live on their website. It is open for viewing now. The views draw attention, you can rate the videos and the better videos rise in popularity to advance to the next round,” said Brown.

Submissions must be received by November 15, 2015. The entries will then be narrowed down to up to 50 semifinalists with official voting beginning on January 5, 2016 to narrow that list down to three. Doritos will then pick one grand-prize winner to see their ad aired during the 2016 Super Bowl, receive a $1,000,000 grand prize, and an epic gig with Warner Bros. and DC Entertainment. All three finalists will each receive two tickets to a private suite at the Super Bowl.  “It’s a long shot but I feel like we have a good shot in the competition,” Brown said.

This is the third national competition Brown has entered. His most recent endeavor was creating two commercials (filmed on Route 66 in Shamrock, TX) for Chevrolet’s Route 66 Super Bowl ad contest in 2012. That competition garnered entries from filmmakers in 32 countries, submitting 400 scripts and 198 films for consideration.

Check out the quirky Doritos and Corvette spot here.